Gary Kloppenburg played basketball at the University of California, San Diego and semi-professionally here and overseas. Kloppenburg began his coaching career as an assistant men's basketball coach at Feather River College ifor the 1983-84 season.
Kloppenburg served as an assistant coach with the WNBA Seattle Storm 2000-02 and Phoenix Mercury in 2003. He was an assistant coach of the Charlotte Bobcats of the National Basketball Association from 2004-07 and an assistant coach of the Indiana Fever 2008-11 and Los Angeles Sparks in 2014.
In 2017, Kloppenburg became an assistant for the Storm. He was named interim head coach in August 2017.  Kloppenburg stayed as an assistant under new head coach Dan Hughes. In the 2019 season, Kloppenburg served as interim head coach again when Hughes was recovering from cancer surgery. In June 2020, Kloppenburg became head coach again after Hughes was determined to be at higher risk of illness from COVID-19.
Last season, Kloppenburg led the Storm to an 18-4 record, good for second place in the Western Conference, although they shared the same record as the first place Las Vegas Aces. The Storm went on to beat the Aces for the WNBA championship.
Kloppenburg was great in the press sessions. While I want to compliment Kloppenburg for those sessions, I have to say all of the WNBA coaches and players were really cool with the press.
The Storm is loaded with great players like Sue Bird, Breanna Stewart, Mercedes Russell and more. The 2021 WNBA season promises to be very interesting though, as there was significant moving of players on other teams via free agency and trades.
The WNBA is set to start the season midsummer, but no specific details were announced. I am guessing teams will play in their home arenas with limited fans to start. I don't know eher that leaves press sessions. I am hoping for another year of covering the teams via Zoom, but I'll find out when the announcements are made.
Either way, I'll be providing coverage here, GlobalTravelerUSA.com and GlobalWomensSportsRadio.com. Also check out WNBA.com for more news and info. 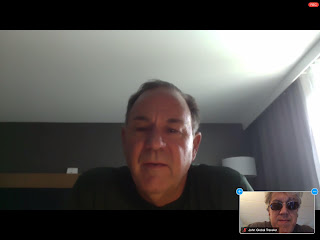