Yesterday, I was "On the Beat" as the New York Liberty held a press session yesterday featuring assistant coach Jacki Gemelos, Jocelyn Willoughby, Neah Odom and Kylee Shook. With all due respect to the players, most of the attention was on the recently retired player-turned coach Gemelos.

After a stellar career at USC, Gemelos was selected by the Minnesota Lynx in the third round with the 31st overall pick in the 2012 WNBA Draft. After not making the Lynx roster, she would not debut in the WNBA until the 2015 season with the Chicago Sky. While she played overseas, she did not resurface in the WNBA until last season, which she split with the Connecticut Sun and the Washington Mystics. Along the way, Gemelos endured 10 knee operations.

Gemelos retired in the offseason with no immediate plans. Plans quickly materialized when Liberty coach Walt Hopkins called Gemelos with a coaching position offer. Although she ddin't originally plan it this way, Gemelos feels she is right where she belongs. "I definitely thought there would be coaching in my future. I just think I'm meant to be here."

Gemelos also joked about the first time she was called “coach” or technically, actually wasn't called “coach.” If that is just one part of the transition Gemelos is making.

Lastly, Gemelos joked and put out a question of the best Greek restaurants in the New York area. As I learned in talking to her last year, Gemelos is a big fan of the chocolate cake from Portillo's. I did not get the chance to ask her if she had the chance to enjoy any in the offseason.

Second year players Willoughby, Odom and Shook talked about their biggest lesson from last season and biggest challenge heading into this season. A rookie's season is challenging enough, but last season's WNBA rookies had the added issue of playing in the Bubble. This year they have the added pressure of competing for roster spots, where last year, the rosters were pretty set as they entered the Bubble.

Willoughby also talked about her book club. In February, Willoughby partnered with Cafe Con Libros, a Crown Heights bookstore, to start Read What You Saw, to explore injustices facing people of color through the eyes of women of color. It focuses on race, identity, healthcare, education, class and more. For now, it is a virtual online meeting, but it has become so popular in the short time, there are thoughts of expanding it already.

The Liberty finished a woeful 2-20 last season, worst in the WNBA. Star rookie Sabrina Ionescu hurt her ankle in the third game and missed the rest of the season. Ionescu is back and at full strength now

It's cliché to say, but the Liberty are better than last season's record indicates. The addition of new coach Gemelos and the growth of second year players Willoughby, Odom and Shook will be a big part of determining just how much better the Liberty are. We will start seeing the answer to that question on May 14, when the Liberty open the season by hosting the Indiana Fever.

The press session can be found at On the Beat With the New York Liberty 04/28/2021. Go to WNBA.com for more info on the Liberty and the WNBA. Check back here, GlobalWomensSportsRadio.com and GlobalTravelerUSA.com for my recurring coverage. 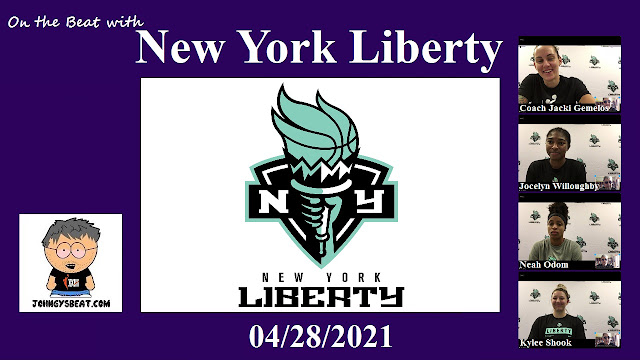