On the Beat With WIU Head Softball Coach Alisa Goler

Western Illinois University Head Softball Coach Alisa Goler is finishing her first season leading the Leathernecks. I went “On the Beat” to get an update interview with Goler.

Unfortunately for WIU, only six of the seven teams make the Summit League Championship tournament. With only five games remaining,WIU has a chance at moving up and making the tournament.

Despite the current standings, the Leathernecks have played better than their record indicates. Twelve of their losses have been by two or fewer runs, a fact that brings conflicted feelings to Coach Goler. While it's definitely a positive to be competitive, it's also frustrating to be so close so often. Still, it shows positive signs.

Coach Goler talked about all of this. She was open and honest in her evaluation of herself and the team. She discussed her frustration and her satisfaction. She gave real insight into her mind as a coach and person. It was refreshingly not just coach speak, but I am not surprised, because Coach Goler has always been that way.

I originally got to know Goler during her four years with the National Pro Fastpitch Chicago Bandits. During her seven total seasons in the NPF, Goler always struck me as a real pro. She was a player with a coach's mind.

Goler did get into coaching, starting as hitting coach at Roosevelt University in 2014. After a fww other successful assistant coaching stints elsewhere, Goler was hired as the fourth Head Coach in program history.

In the interview, Goler talked about the differences in approach, evaluation and expectations between an assistant coach and Head Coach. Again, Goler was open about the challenges and rewards. In summary, she happily stated she is right where she wants to be.

Getting a little ahead of ourselves, I asked Coach Goler about Fall Ball. With no non-essential fans allowed at games so far, I am already looking forward to the possibility of attending future games. While the schedule isn't set yet, WIU will play Fall Ball (and hopefully, I will be able to finally see Goler lead the Leathernecks in person).

Fans might be able to return for Fall Ball, but Leatherneck Nation will have their eyes on the team this weekend as they hope to take care of North Dakota. WIU needs to take care of business on their end, then watch the scoreboard for the other Summit League games which will affect the tournament.

We wish the Leathernecks good luck as the season ends. Hopefully, they will make the tournament and extend the season a bit.

Thank you as always to Coach Goler for her time and consideration. Thanks also to Assistant-Athletics Communications Keion Robinson for facilitating our interview.

Our interview is at On the Beat With Coach Alisa Goler of Western Illinois University Softball. Also check GoLeathernecks.com for more info on WIU Softball. 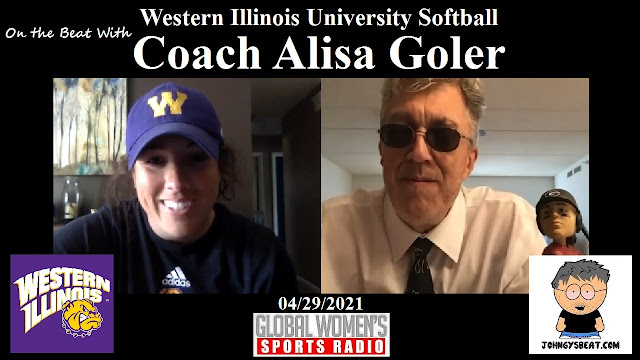