The inaugural Athletes Unlimited Volleyball season ended in March with Jordan Larson being crowned the first champion. I came to really enjoy the league and the players much more than I expected. Learning about the players and getting to know them through the press sessions was one of the fun parts.

One of the top players for the first season was Aury Cruz. Born in Puerto Rico, Área Esther "Aury" Cruz Dalmau competed for the Puerto Rico national team at the 2008 Olympic Qualification Tournament in Japan, where she was named Best Server at the event. She attended the University of Florida, where she was inducted into their Athletic Hall of Fame as a "Gator Great" in 2014.

During one of the press sessions, I asked Cruz about that honor. She talked about it being a great feeling. She never imagined she would be among the greatest athletes from that school. It's always great to hear a player appreciate those such honors that way.

Players like Cruz accumulate many awards and honors during their careers. I always wonder if they start to become immune to the specialness of such things. It's not that the players don't care, but after so many awards, does it become routine to them? Cruz was genuinely proud and happy with her place in that HOF.

During the AU season, Cruz finished in fourth place with 3,582 points. That's only 108 points behind second place. While it is 987 points behind first, champion Larson dominated the league. I am judging Cruz on the rest of the league.

Finishing in fourth, Cruz was a regular presence in the post-match media sessions. She was always a good interview.

There will be a second season of AU Volleyball, although dates and location have not been announced. Go to AUProSports.com for more info and updates. I'll also provide recurring coverage here, as always. 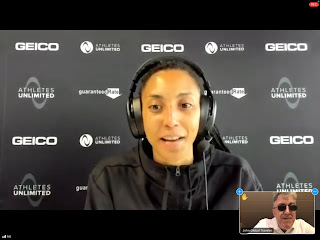