Cards That Never were is a recurring series in which I create virtual trading cards for players missed in various sets. It is a concept I have borrowed from far too many to list, but I appreciate all of their efforts. More of my creations and a lot of great stuff from others can be found in the Custom Baseball Cards Facebook group (and it is not just baseball card creations).
Jason Thompson was selected by the Detroit Tigers in the 4th round of the 1975 MLB Draft. He made his debut in 1976 and played through the 1986 season. Over the course of his career, he played for the Tigers, the California Angels, the Pittsburgh Pirates and the Montreal Expos. He had 1253 hits, 208 homeruns, 782 rbi's and 640 runs scored with a .261 batting average. Thompson made three All-Star games.
For his efforts, Topps gave Thompson cards in their sets from 1977 to '86. A 1987 card would not only fill the only omission for Thompson, it is a "career capper" and his only Topps card with the Expos. I had to make this one. 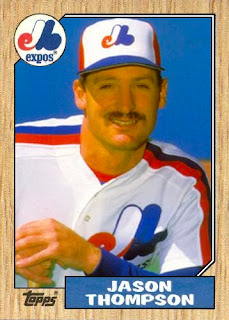