I'm back with one of my convention-wrestling-softball buddies, who is back with one of the sweetest convention celebrity guests I have met. Jenna Elfman and Tony Feddeler are two great folks (even if this picture is reversed due to the selfie effect).
Elfman was a dancer in some music videos and went on to an excellent acting career. Dharma and Greg was probably her first big exposure, but she has also done many movies and other episodic television. She has aldo done voiceover work.
Elfman has other famous folks in her family. Her uncle is the lead singer for The Lettermen. Her husband Bodhi is an actor and the nephew of composer Danny Elfman (who created the theme for The Simpsons, among his other great work).
When I met her at the Motor City Comic Con, Elfman was extremely nice. We chatted for longer than usual at such an event.
Tony met her at Walker Stalker, a convention featuring horror, sci-fi and fantasy. Fortunately for me, I met Elfman before Tony did, otherise I would be pretty envious of this picture. Either way though, I am happy Tony got to meet her.
Of course, the pandemic has postponed or canceled all such conventions this year. Neither Tony nor I have been to any events since February. It looks like it's not going to get much better through the rest of the year. This will be the worst year for celebrity encounters for Tony, me and most everyone else. 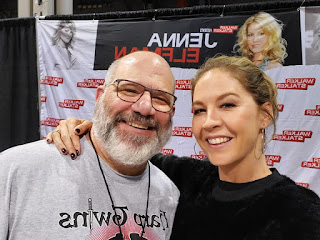