The Chicago Sky held an abbreviated media session today from training camp. It was Rookie Day, as Coach James Wade was joined by newcomers Sierra Campisano and Kobi Thornton.

Campisano and Thornton discussed the challenges of transitioning to the WNBA. All rookies face a tough situation, but the Sky have a tougher than usual camp, as they are loaded with talent.

Coach Wade addressed the issue of added depth for parts of the season when regular rostered players are not available. He also talked about the point guard battle, the team's first exhibition game on Sunday, working on team defense and Candace Parker.

Coach Wade laughed and stated I caught him off guard with a question about pressure coming from some predictions of winning the title. He gave a great answer, addressing the specific question, but also relating it to life.

He ended the session as he usually does, by reminding all to maintain social distance and to continue masking up. Coach Wade continues to impress me with his demeanor and attitude. I predicted a Sky title this season and I grow more confident in that every day.

As for forward Campisano, in her final season at Cal Poly, she averaged 15.8 points and 8.7 rebounds per game, while shooting 44.1% from the field and 29.7% from beyond the arc. She also earned All-Conference First Team honors. Coming out of high school, she ranked as the number 14 overall recruit in the country. She started at the University of Oregon, before transferring to Cal Poly after two seasons. Last month, Campisano signed a training camp contract with the Sky.

Fellow forward Thornton starred at Clemson, where she shot 47.3% from the field and 22.2% from three point land during her four seasons there. She also averaged 12.0 points and 6.4 rebounds for her career. She is one of only 15 players in program history to rach 1,000 points and 500 rebounds. Thornton was selected by the Atlanta Dream in the third round of the 2020 WNBA Draft, but did not make the team.

Campisano and Thornton face an uphill battle to make the Sky roster. Minimally, they will serve as valuable players in camp, while also giving the coaching staff a chance to evaluate them for future signing in case of injuries or while other players are absent. There's still a chance they make the roster or impress another team enough to acquire them.

This Sunday, the Sky have their first exhibition game against the Fever in Indiana. The Sky open their season on Saturday, May 15 when the travel to Atlanta to face the Dream.

For the interview session, go to Chicago Sky Media 05/06/2021. Go to WNBA.com for more info on the Sky and the WNBA. Check here for my recurring coverage, as well as on GlobalTravelerUSA.com, GlobalWomensSportsRadio.com and Patch.com. 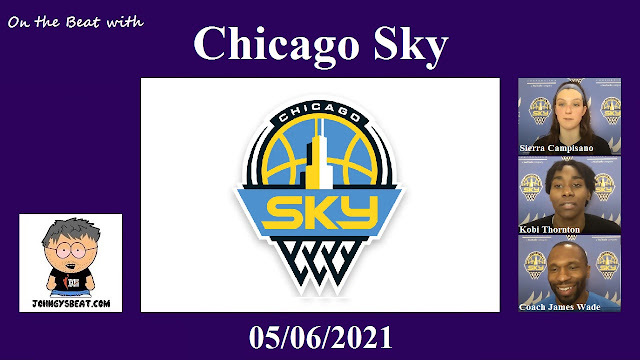