Taurasi led off by discussing her offseason routine. For Taurasi, playing is a year-round job. During the season her job is on the court, but in the offseason, she works out daily to stay in top shape. She's always looking for new physical challenges to keep getting better.

She talked about being considered a G.O.A.T. Ever humble, she called it an honor, but was quick to point out it's a team effort and there are many great players.

Lastly, she discussed, or I should say dismissed, social media. While she acknowledges it has positives and it serves a purpose, she calmly stated it doesn't impact her at all.

Griner continued the talk about social media, basically echoing Taurasi. Griner has battled bullies most of her life and has risen above it all. Social media bullies or unfair criticisms won't affect her much. She did admit she is human like everyone else and sometimes things do get to her, but mostly she is unaffected. Griner also compared playing in Russia to the WNBA.

Skylar Diggins-Smith was next, talking about the upcoming season. She also gave her thoughts on the WNBA branding, along with the messages and public stance of the league and the players. This was one of the most serious parts of the session. She was direct and eloquent as she discussed the league's actions and impact.

Mercury newcomer Nurse finished the session on a lighter note as she discussed her personal branding. She has exciting things coming up and she was happy to discuss upcoming releases, as well as promising she sill continue to bring the heat.

Nurs finished by delving into the topic of expansion, specifically into Toronto, Canada. A native of Ontario, Nurse felt Toronto would be a great place for a team and the WNBA will eventually expand. She gave her thoughts on being involved in ownership, chuckling that the league wouldn't let that happen if she was still playing.

Today's session was very interesting The four athletes come from different places with unique perspectives. They are in different parts of their careers, but all united for the team and in the efforts of the league. It was a fun session, yet also highlighted by serious, frank discussions of the growth of the league on and of the court.

The media session is at On the Beat With the Phoenix Mercury 05/06/2021. Go to WNBA.com for more info on the Mercury and the WNBA. Check back here for my coverage, as well as GlobalTravelerUSA.com, GlobalWomensSportsRadio.com and Patch.com. 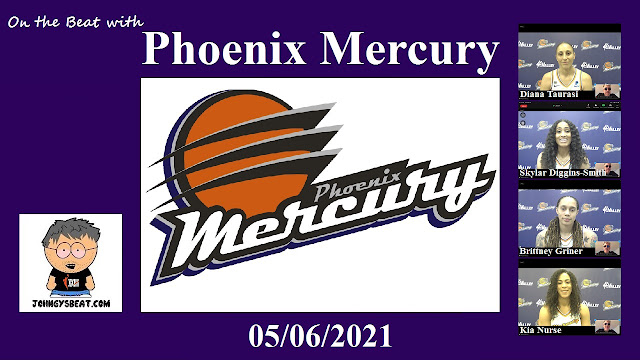