On the Beat With Coach Rabun Wright

I was “On the Beat” with Coach Rabun Wright, Assistant Women's Basketball Coach at Jacksonville State University.

Our conversation started with her unique name. Coach Rabun explained how she shares her name with Rabun County in Georgia. It's an interesting name for an interesting person.

Coach Rabun graduated from Rabun County High in Clayton, Georgia. She led her team to the school's first-ever region championship. Along the way, she picked up a bunch of awards and accolades, including being named an All-Region player.

While playing for UNA, Rabun helped re-establish the Fellowship of Christian Athletes. She also led a bible study group of UNA women athletes.

Rabun got her start in collegiate coaching at Shorter University. She also was on the coaching staff at Florida SouthWestern State College prior to joining JSU.

In our interview, Coach Rabun talked about how she started in coaching. While it wasn't part of her original plan, she feels it was God's plan and she is doing exactly what she should be doing. She talked about the possibility of coaching in the WNBA or NBA, either position she would welcome.

We also talked about her work with ministry programs, her faith and the social justice movement. I am putting all together here, because they are all related. All of her work and her statements lead back to her faith. As a woman, especially a woman not of color, Coach Rabun feels it is important, her duty actually, to speak out, to use her platform and to be an example.

Coach Rabun obviously has a deep faith and she is very open and vocal about it, always in a positive way.  Her Twitter lead statement is “Just be a good person. It's really that simple.” That's also a simple statement, but one that says a lot.

Coach Rabun's faith runs deep and so does her love of basketball and coaching. Her latest tweet says it all.  “I love being a basketball coach. That's it. That's the tweet.” That's typical Rabun. Straight to the point.

I appreciate Coach Rabun for her time and consideration for our interview. I encourage everyone to follow her career path, which will hopefully one day lead her to the WNBA. If not, as Coach Rabun would say, it will lead wherever it is meant to go. No matter where it goes, we will be following. Our interview can be found at On the Beat With Rabun Wright.

For more info on Coach Wright and Jacksonville State University, go to JSUGamecockSports.com. Also, check my recurring NCAA coverage her, on GlobalWomensSportsRadio.com, Patch.com and GlobalTravelerUSA.com. 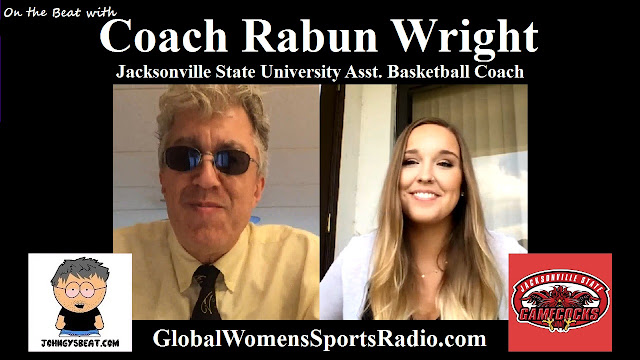