On the Beat With Lauren Jackson

About a week ago, the Naismith Memorial Basketball Hall of Fame Class of 2021 was announced. Last night, I had the pleasure of interviewing Lauren Jackson, one of the 16 honorees.

A native of Australia, Jackson's awards and her list of accomplishments could fill an entire room in the HOF. Selected by the WNBA's Seattle Storm with the first overall pick in the 2001 draft, Jackson played 12 years with the Storm, winning two championships along the way. Her other WNBA achievements include:

Jackson's basketball journey started well before her WNBA career though. She started playing when she was four and made the Australian Under-20 team when she was only 14. She would go on to play for Team Australia in four Olympic Games, winning three silver medals and one bronze.

I started by asking Jackson what the induction meant to her. As I said to her, it is a question she has answered many times and will answer many more times, but one I wanted to hear her answer directly. While her answer wasn't a surprise, it was important to hear her emotion.

The interview moved on to her earliest days playing. As a youngster paying against older players, she admitted to feeling intimidated, but learning to adjust.

I always like asking if the person was able to soak in any of the experiences as they were happening. Obviously, Jackson enjoyed playing, but she talked about being able to feel it in the moment.

A 6'5” power forward and center, Jackson was actually ahead of her time while playing in the WNBA. She talked about the game changing, with actual positions being less important and more emphasis on shooting. The game now might be even more suited for Jackson. Despite having a Hall of Fame career as was, imagine what she could do now.

Talk moved on to her book, My Story: A Life in Basketball and Beyond. Having previously read and enjoyed the book, I was surprised about some of the obstacles Jackson had to overcome. She talked about the cathartic process of writing the book. She ended by saying she enjoyed writing it, but won't do another.

As someone who has seen so much of the world, I asked her for her favorite places. Se did not hesitate in mentioning South Korea, stating it was one of the best experiences of her life.

Lastly, bringing it back to her homeland, I asked Jackson to name a few “must see” places in Australia. I think she is almost as passionate about Australia as she is about basketball. I enjoyed hearing her thoughts on the beautiful area.

I really appreciate Jackson for spending time talking about her career. One week removed from the big announcement, Jackson has been inundated with interview requests. I thank her for her time and consideration, as well as the fine folks at the Naismith Memorial Basketball Hall of Fame for facilitating the interview. The interview can be found at On the Beat With Lauren Jackson. 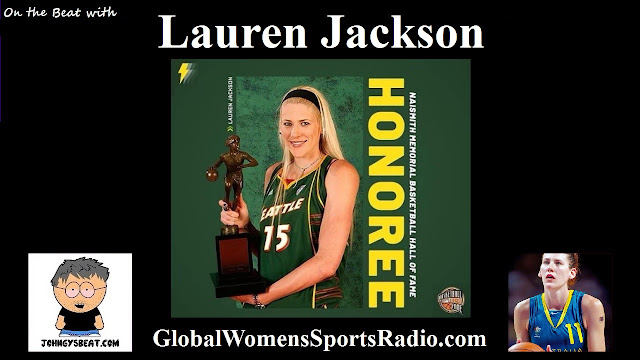