On the Beat With Kal Herro at the Squared Circle Expo

I have known Kal Herro since he was a toddler at Great Lakes Championship Wrestling wrestling events his father David promoted in Wisconsin. I have watched him grow up from afar over these many years. Now, I am watching Kal live his dream as a wrestler.

Even as a youngster, you could tell Kal was destined for this. He was surrounded by wrestlers and wrestling. More importantly, he had charisma and personality right from the start. Over the years, he dabbled in and around the ring, taking part in segments on various shows.

Kal was a natural. The progression was also natural, never forced. From bit appearances on shows to actually wrestling in matches, the journey was a wonderful slow build to witness.

Recently Kal relocated from Wisconsin to Louisville to join Ohio Valley Wrestling. He is being trained by long-time friend Al Snow and Doug Basham. This is formal training, although Kal has essentially been training all his life.

Kal is known as "The Fanny Pack Kid." It's a natural and fun fit for Kal. I hesitate to call it a gimmick, because it's just Kal being Kal.

When I saw Kal was appearing at the Squared Circle Expo, I reached out to him about an interview. Ever the gracious young man, Kal quickly granted my request. At the event, I waited for a quiet time and approached Kal. This was an interview 10+ years in the making.

There was so much ground to cover, I could have talked to Kal for much longer, but I didn't want to take him away from the fans that long and I really only wanted an introductory type interview. I am hoping to get many more interviews with Kal down the line.

We talked about his transition to actual wrestling training, having his friend Al as his trainer, enjoying the moments and more. You can feel his passion and his excitement. You can also clearly see his personality. Wrestlers often talk about the "it" factor. This guy has it.

Later in the day, I talked to proud Pop David. I congratulated him on raising a great young man. I have watched these two interact for years. I see their social media posts. They have a relationship which is heartwarming.

I thank Kal for his time and consideration for the interview. I appreciate my friendship with Kal and David. They truly are #SuperFriends.

Our interview can be found at On the Beat With Kal Herro on YouTube. Enjoy the interview and then go follow "TheKalHerro" on social media. This "kid" is going places and I will enjoy watching his journey. 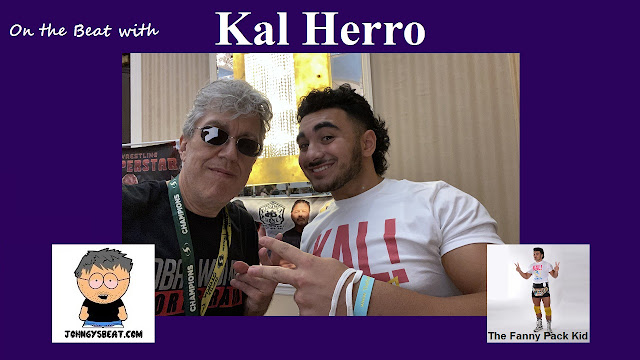