The Squared Circle Expo debuted this weekend in Indianapolis, Indiana. I have been to hundreds of conventions and events and this was the best debut event I have ever attended.

It all started more than a year ago, when the debut of the SCE was originally announced. Unfortunately the pandemic caused it to be postponed twice, but the wait was well worth it, because the SCE would become bigger and better.

A positive sign for the event was seen throughout the rescheduling process. The folks behind the SCE kept an open line of communication on social media. When they knew something, all of their followers knew it quickly. In a time of great confusion, the promoters were direct, honest and forthcoming with every development.

When things cleared enough for them to set a new date, they did and the wrestler guest lineup soon started getting announced. What a lineup it was. Ultimately, more than 30 wrestling stars past and present were announced.

Then came announcements for panels, a cosplay contest, a night of wrestling and more. Every couple of days, it seemed another big announcement was made. While all of this was happening, the promoters were also dealing with the ever-changing health protocols.

Finally, May 14 arrived and the Squared Circle debuted. Again, right from the start, there were plenty of positive signs. The Will Call line ran smoothly and moved quickly. As we waited, wrestlers walked by to take their places at their tables. There was an undeniable buzz in the air.

I can't possibly recap every bit of the convention. I was literally busy from 5 p.m. Friday through midnight Saturday, except for a few hours of sleep. Even my list of selected highlights I pretty long.

There were so many other great moments, too. Literally every wrestling guest was great, spending as much time as possible with each fan to make that encounter special.

With so many wrestlers I wanted to meet, usually I would be in a frenzy trying to coordinate things, but the SCE promoters promised all wrestler guests would be at their tables for the entire convention, except for breaks for panels. This relieved all stress, knowing I could take my time and meet every one without worrying about missing any. I met all of them easily and some twice because I had extra time. That has never happened  for me at any previous convention.

I woke up Sunday morning bummed that the convention was done, but once again the folks at SCE made an announcement to get me excited. The Squared Circle Expo II will return to the same location April 15-16, 2022. I can't wait!

For more info on the SCE, go to SquaredCircleX.com. Also follow SCE on social media. Lastly, check here, Patch.com, WrestlingFigs.com and GlobalWomensSportsRadio.com for my recurring coverage of the SCE. 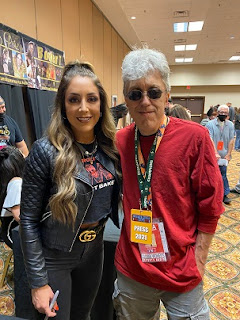