Coach Laimbeer discussed the team's performance so far. While he did not like the “sloppy” effort in their latest preseason game, which included 27 turnovers, he also quickly stated he doesn't care about wins and losses in the preseason.

The talk turned to his recent hiring of Rodgers as an assistant. Coach Laimbeer obviously has a lot of respect for Rodgers. They have a long history together, going back to their years with the New York Liberty. Laimbeer described Rodgers as more of a players' coach than he is, jokingly saying he will tell her to fix the problems he made.

Coach Laimbeer also gave a glimpse into his younger days. Fittingly on Mother's Day, he talked about the role his mom played in his athletic career.

Rodgers also spent much of her time discussing her path to coaching and her coaching style. Again, it is obvious she has a lot of respect for Coach Laimbeer.

Talk then turned to “They Better Call Me Sugar,” her autobiography. Rodgers felt it was the right time to do it. She tells her story of overcoming the odds.

This is a great hire by Coach Laimbeer. This is one of those little moves, of the court, that will pay big dividends. Rodgers will bring a youthful outlook, having just retired from active play.

Ta'Shauna “Sugar” Rodgers was a star at Georgetown, before being selected by the Minnesota Lynx in the second round (14th overall) of the 2013 WNBA Draft. After one season with the Lynx, she was traded to the Liberty, with whom she played through the 2018 season.

After the 2018 season, Rodgers was traded to the Aces in a four team swap. She played two seasons with the Aces before retiring after last season.

The Aces open their season on the road in Seattle, facing last season's champion Storm. Many experts predict that will be a preview of a repeat of last season, when the two teams met in the Finals, won by the Storm.

The interview session can be found at On the Beat With the Las Vegas Aces 05/09/2021. Also, check my recurring coverage of the WNBA here, on GlobalTravelerUSA.com, Patch.com and GlobalWomensSportsRadio.com. 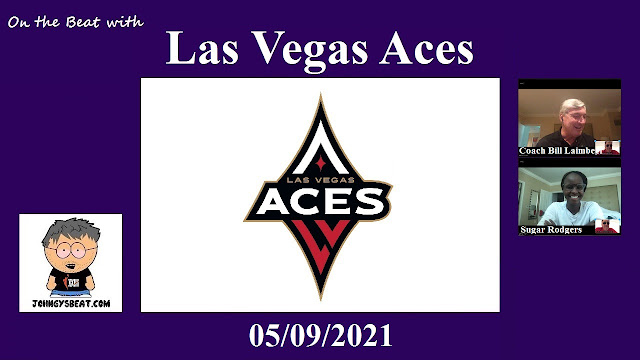