The reigning champs had one major change in the offseason. Coach Hughes returned from a one year absence from the sidelines due to health concerns in the COVID pandemic. Assistant Gary Kloppenburg took the helm and guided the Storm to the title, but now returns to his assistance coach role.

Coach Hughes discussed how his time away from the bench might have affected his perspective. Of course, despite not coaching the team on a daily basis, Coach Hughes was still involved in the team. The change in coaching didn't affect the team last season, nor is it expected to disrupt the tam this season with Coach Hughes back. It's still the same system.

Coach Hughes, Stewart, Bird and Loyd all gave their thoughts on the state of the league and the ongoing social justice movements. All agreed both are doing great, heading in the right direction, but still having a way to go.

A good portion of Stewart's session focused on her recent engagement to Phoenix Mercury player Marta Xargay. Stewie took us through the process leading to the big moment. She also talked about playing against her betrothed in games.

Bird also talked about pre-game feelings. After playing so long and achieving a high level of success, Bird still gets excited, but the butterflies have mostly been replaced by a calmness. She assured us she is still just as fired up though.

Lastly Loyd talked about being included in the new mural by artists Mari Shibuya an Zahyr Lauren. Located a block away from the Storm's home at Climate Pledge Arena, the mural measures 50 feet by 20 feet and features Loyd, Stewart and Bird.

Loyd also talked about her stint as an assistant coach on Doug Bruno's staff at DePaul this last season. Loyd has a long relationship with Bruno and was happy to coach the Blue Demons. She was quick to state she has no intention of going into coaching, but she wanted t help the young athletes and give back a bit.

Lastly, I got Loyd to talk a bit about Chicago food. A native of Lincolnwood, a suburb just north of Chicago and one block from where I live, Loyd mentioned Lou Malnati's Portillo's, East of Edens and Dear Franks. Aside from being a star player, I can tell from my experience, Loyd has excellent taste in dining options.

The Storm open their regular season Saturday, when they host the Las Vegas Aces. The Storm and Aces met in the WNBA Finals last season, after having identical 18-4 records in the season. The Aces, Storm and Chicago Sky are considered favorites to win it all this year.

The interview session can be found at On the Beat With the Seattle Storm 05/09/2021. Also, check my recurring coverage here, on GlobalTravelerUSA.com, GlobalWomensSportsRadio.com and Patch.com. 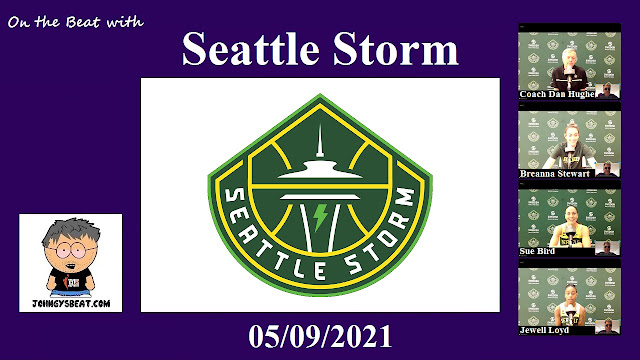