The Squared Circle is three weeks away. After a  necessary postponement due to the pandemic, the Squared Circle Expo will debut in Indianapolis May 14-15. I have been to hundreds of conventions and I have no doubts this one is going to be special.

The convention organizers have been diligent in keeping everyone updated as the process went along. From announcing the delay to progress through the wait to the procedures at the convention. They have gone way above and beyond to make it safe and enjoyable.

I have met about half of these legends. I look forward to meeting the ones I have not met yet, but also seeing the others again. Charles Wright (The Godfather/Papa Shango) is always fun, like when he calls me "Jay Leno" or chokes me.

Melina Perez is one I really want to see again. Melina is one of the most underrated women of the WWE. She doesn't get the credit she deserves from her time in the WWE. She was a solid manager and a multi-time champ, plus she had one of the greatest ring entrances ever.

The Squared Circle Expo promises to deliver a unique fan experience. Promoted as a " convention dedicated to the culture of professional wrestling and sports entertainment," the Squared Circle Expo takes the best elements of conventions and adds a few new ones to deliver a unique fan experience. The two day event will include wrestling superstars, meet and greets, photo ops, special events, seminars, memorabilia vendors, Q&A panels and more. There will even be a live wrestling show on Saturday night.

I'll be "On the Beat" all weekend and have reports on social media, as well as recaps here and on GlobalWomensSportsRadio.com. Until then, go to SquaredCircleX.com for all the current info and updates. 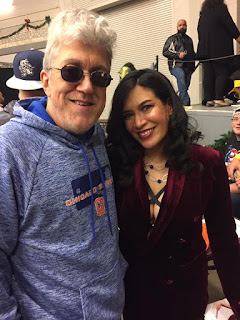