Cards That Never Were is a recurring series in which I create virtual cards for players missed in various sets over the years. It is a concept I have borrowed from far too many to list, but I appreciate all of them. You can find more of my creations and a lot of other great creations (and not just baseball cards) in the Custom Baseball Cards group on Facebook.
Another great source for virtual cards is When Topps Had Balls. Gio's site has thousands of card creations, including one I showcase today.
Marc Hill was selected by the St. Louis Cardinals in the 10th round of the 1970 MLB draft. He made his MLB debut in 1973 with a one game appearance. After playing in 10 games in 1974, he was traded to the San Francisco Giants after the season. After 5.5 seasons with the Giants, the Seattle Mariners purchased him midway through the '80 season. After half a season with the Mariners, he signed as a free agent with the Chicago White Sox, for whom he played through the 1986 season. All told, Hill played in 737 games, getting 404 hits for a .223 average, with 34 HRs, 198 RBIs, 146 runs and one stolen base.
I had a funny experience with Hill once. At a card show, Hill mentioned that Carlton Fisk and he owned the White Sox catching tandem HR record of 37 in 1985. Fisk actually had 37 HRs that year and Hill had 0, but as a pair, they do own the record!
For his efforts, Topps put Hill on a multi-player rookie card in their '75 set. He received a solo card in every set 1976 through 1986. That left a 1974 rookie card and an '87 "career capper" card. Gio from WTHB created the '74 card. That left the '87 card for me to create. Now Hill has his complete set. 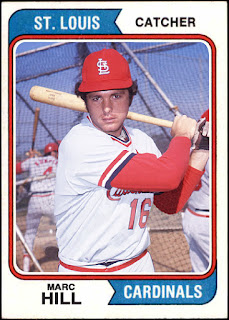 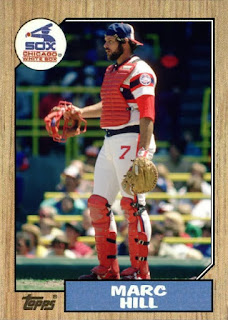