Brooklyn, New York native Louis Gossett Jr. has had a legendary acting career spanning more than 60 years. He won an Academy Award for Best Supporting Actor and an Emmy Award, among his other many honors. Gossett was a great choice to portray baseball Hall of Famer Satchel Paige in a biography on his life. While Paige got a Topps 1953 card, Gossett now has a Celebrity Jersey Card. 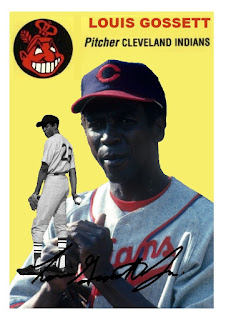 Edward Ernest Reinhold went from his native Delaware to Hollywood to become  a star. Judge's first on screen role was on television's Wonder Woman. Over the next 40 years, he has appeared in countless films and tv shows, including Fast Times at Ridgemont High., in which he wore a Cleveland Indians jersey. That performance caught the eye of a faithful reader Brian suggested I make a Celebrity Jersey Card for Reinhold. I appreciate Brian's interest and his assistance in supply the pic of Reinhold. 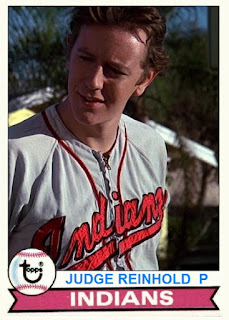