The Connecticut Sun are 8-2 in first place in the WNBA Eastern Conference. They are tied with Seattle for the best overall record in the league. That will change on Sunday, when the two teams meet in Connecticut.

On Friday, the Sun held an offday media session featuring Coach Curt Miller an players Natisha Hiedeman and Stephanie Jones. Actually, this is an offweek for the Sun, due to a quick in the schedule which saw them last play on Saturday, meaning the Sun are in the middle of one full week of no games.

The off week was one of the main topics of discussion during the media session. Coach Miller described it as good and bad. For the Sun and Miller, it is at least a timely break, as Jonquel Jones has departed the team to compete for Bosnia and Herzegovina at the FIBA European women's basketball championship.

One of the top candidates for league MVP, Jones is averaging 21.6 points10.4 rebounds and 3.0 assists per game. JJ will miss most of June, which amounts to at least four games and possibly six. The Sun are deep, but replacing a player like JJ won't be easy.

Coach Miller talked about using the extra long layoff to work on things without JJ. It is going to take several players stepping up to fill the void.

Of course the team still practiced and worked out during the “off” week, but the players did have a little extra time to do things outside of basketball. Hiedeman talked about going to the beach and getting a little tan. She also talked more seriously about using the off time to work on her game and work with the team on plays without JJ.

A star player at Marquette in Milwaukee, Hiedeman talked about her family crossing the Illinois border to see her play in the upcoming two game mini-series against the Chicago Sky at Wintrust Arena. I expect there to be a big Hiedeman fan group in Chicago. I also look forward to seeing Hiedeman play in person for the first time in a couple years.

Last up was Stephanie Jones, sister of the departed Jonquel. After a successful career at Maryland, Stephanie went undrafted and played in Poland for a season. She signed a training camp contract with the Sun and made her debut on May 14. Stephanie has played five games, averaging 3.2 points and 2.0 rebounds in those games. Stephanie is one of the players Coach Miller will need to help while her sister is away. Stephanie knows Coach Miller will look to her and she is excited about the opportunity.

While Sunday's game against the Storm will be a big test, the next five games for the Sun (possibly all without JJ) aren't quite as challenging. They have three games against Chicago and one game against Washington and Dallas. Once again, timing might be on the side of the Sun. First up though is Seattle and for now, that is where the focus is for the Sun.

The interview session can be found at On the Beat With the Connecticut Sun 06/11/2021. Check WNBA.com for more news on the league. Also, check here for my recurring coverage of the WNBA. 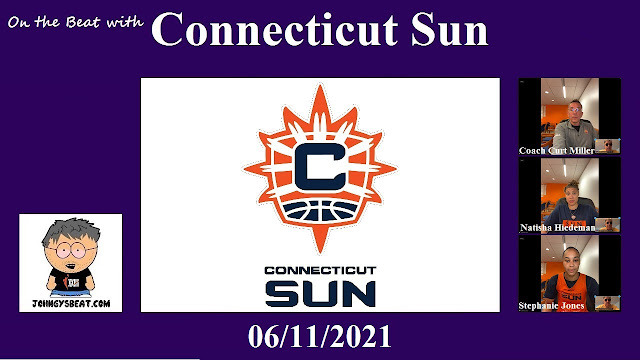