The Atlanta Dream held a media session featuring Head Coach Mike Petersen and players Cheyenne Parker and Chennedy Carter. As always on off days, the media session was more focused on general topics.

Coach Petersen started by discussing the loss of Tiffany Hayes. Losing a player like Hayes causing adjustments, but the team has made adjustments all season. One of those adjustments involves the play of Odyssey Sims. With the revolving door of players arriving late from playing in other countries and leaving for tryouts elsewhere, all teams are adjusting on the fly. Fortunately, the WNBA will take a league-wide break for the upcoming Olympics.

Next up was Parker, one of my long-time favorites from the Chicago Sky. I started by thanking her for her time here. She was always a class player, willing to give solid interviews. I love the current Sky team, but losing a player like Parker is always sad.

Parker talked about adjusting to her new team. Going from the blues to the reds was odd, but she is adapting and loves her place on the team. She talked about the whole process of joining her new team. Parker also gave a quick update on how she is doing.

Lastly, Carter took the media seat. She started by discussing what things she learned last season that she brought into this season. Her injury update was quick, but to the point. She finished with discussing Atlanta.

The Dream currently sit in fifth place in the Eastern Conference with a record of 5-7. Despite that, they are only three games out of first place. The league is pretty balanced, with only four teams above even. Unfortunately for the Dream, they have lost five of their last six games, after a four game winning streak.

The Dream return to action on Wednesday, when they host the Minnesota Lynx. After that, they have two home games against the New York Liberty. A three game sweep would put the Dream over the .500 mark and probably into the top half of the Conference. It's too early to call these “must win” games, but they are big games and games the Dream could win.

You can find the interview session at On the Beat With the Atlanta Dream 06/22/2021. Also check back here for my recurring coverage of the WNBA. 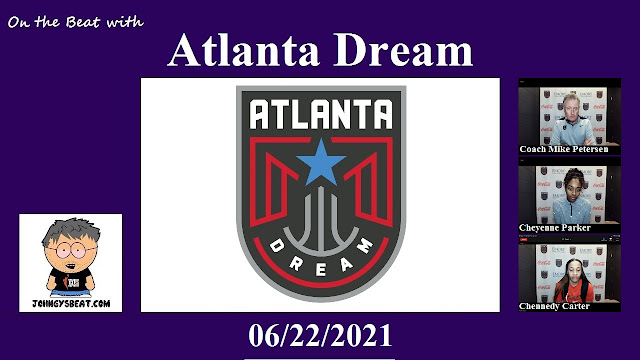