The Phoenix Mercury held an off day press session featuring Head Coach Sandy Brondello. Because of all of the Olympics press obligations, players were unavailable.

Coach Brondello started by assessing the Mercury's defense. Allowing 80 points per game, the Mercury is seventh in points by opponents. The Merc ranks sixth in rebounds (36.2), last in steals (4.1) first in blocks (6.0) and last in forced turnovers (10.6). Coach Brondello summed it by stating the team is good, but not great and they need to get great to be contenders.

Along the same lines, Coach Brondello discussed the impending return of Diana Taurasi. The injury to Taurasi certainly contributed to the team's problems and her return will help the defense, the consistency and the overall play.

On her off days, Coach Brondello watches other games (WNBA and NBA). She definitely has her eyes on the Phoenix Suns. Coach Brondello did admit even on off days, she really doesn't have the time to watch the games live, but watches them later.

Consistency is an area of focus for Coach Brondello. Spurts of greatness won't win the title. The Mercury need to play full games and multiple games at a consistently great level.

The Mercury currently sit tied with Minnesota in third place of the Western Conference. At 6-7, they are five games behind first place Seattle and four games behind second place Las Vegas.

Due to the oddness of the WNBA schedule, they haven't played since they beat Los Angeles on June 18. That win snapped a four game losing streak for the Mercury. Their next game is Sunday, June 27 when they host Los Angeles. With two games against Seattle and one against Las Vegas in July before the break, the Mercury need to stack some wins now.

The media session can be found at On the Beat With the Phoenix Mercury 06/23/2021. Also, check back here for my recurring coverage of the WNBA. 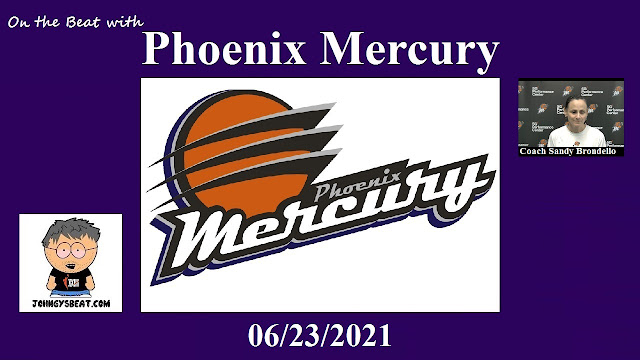