Coach Miller started the press session and I got it off to a bit of a rocky start. In a couple weeks, the Sun will face the Chicago Sky three times in eleven days. I asked Coach Miller about playing a team that many times in a short span. I wan't necessarily talking about the Sky, but any team in general.

Coach Miller bristled a bit, stating he wasn't looking that far ahead. He was only focused on the upcoming game with the New York Liberty. He then did answer the question, giving real insight, exactly what I wanted.

Usually on sessions not on game days, the questions are a bit looser and more general. Some reporters even go for silly or humorous. I was genuinely curious about laying a team that much in a compact time period. In all fairness, Coach Miller did ultimately give an excellent answer, one I wasn't even considering.

I asked Thomas about the Sun being ranked second in some power rankings. I wanted ti know if that stuff means anything to players. Do they care at all abou those rankings? Thomas gave a classic answer.

Lastly, I asked Hiedeman about her time as the tam veteran early in the preseason. Hiedeman talked about how that experience helped her development. I'm sure it isn't the sole factor, but Hiedeman is having her best season.

The Sun are 7-2, coming off a Tuesday 74-67 win over the Las Vegas Aces. Today, the Sun host the New York Liberty, who are 5-3 and a much-improved team from last season. NY's Sabrina Ionescu isn't a one-person show, but she is a difference-maker.

The Sun come into the game as 9.5 point favorites. I think it will be closer than that, but the Sun will win. I am calling for an 85-80 Sun victor

The interview session can be found at On the Beat With the Connecticut Sun 06/04/2021. Check back here for my recurring coverage of the WNBA. 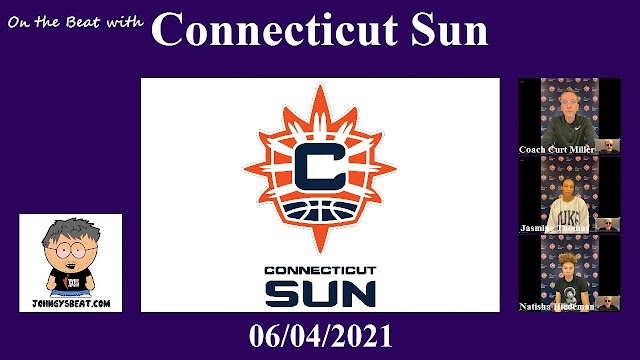