Girl Fight Wrestling is back and women wrestlers are in peak form already. With the return of GFW, I went back “On the Beat” with wrestling historian and author John Cosper.

Over the last year, John has become GWSR's “go-to” correspondent for GFW. The author of more than 20 wrestling books, John became friends with GFW founder Mad Man Pondo and eventually co-wrote Memoirs of a Mad Man with Pondo. As a knowledgeable and respectful fan and wrestling author, John is the perfect person to give updates and opinions on the action of GFW.

We started the interview talking about A Champions Challenge, GFW's big return event from a couple weeks ago. GFW champ Mickie Knuckles fought seven other women in her title defense. Billie Starkz won the match to become the new GFW champ. While it was somewhat of a surprise, Starkz is a very talented, young wrestler who is advanced beyond her years.

The wily veteran Knuckles is as tough as can be. I saw her up close during her stint at Resistance Pro Wrestling, where she held the women's title. No matter the outcome of any of her matches, Knuckles always gave her opponent a beating (and usually took a beating herself). On this night though, Starkz pulled out the win and is a deserving champ.

John is very high on Starkz and Knuckles. He feels Starkz and Knuckles could both be in a major company. Starkz's age might be the only thing holding her back right now. On the opposite end, Knuckles would be a great veteran presence in the locker room. Of course, Knuckles can still go in the ring, too.

Talk then moved on to GFW's event lat Saturday. Knuckles and Charlie Kruel opened the night with Knuckles getting the win. What a way to start a night of wrestling! Knuckles versus Kruel could main event any show.

John gives a rundown of the entire card, which also included Starkz, Dani Mo, Big Momma, Nikki Victory, Judi Rae Hendrix and more. John had interesting takes on all the matches and the women wrestlers. This night sounds like it could be a “Best of GFW” dvd all by itself.

I asked John for his thoughts on which of the women he thought would be the next one to get a call from any of the big companies. Several GFW alums, like Skye Blue and Sarah Logan, have already made appearances with the big companies and more will be following. The GFW roster is arguably better than ever.

We took a related detour to talk about Pondo. A man of many adventures, Pondo doesn't get the overall credit he deserves. He has done so much for women wrestlers.In an era where the big companies talked about the women's movement, Pondo was putting on shows highlighting women actually wrestling. Pondo has given women a platform to showcase their skills, while also sharing his years of experience.

Lastly, we talked about John's latest endeavors. His most recent books are Princess Victoria: A Tale of Tears, Triumphs, and Turnbuckles (with Vicki Otis) and Chris Candido: No Gimmicks Needed (with Jonny Candido). Ever-busy, John is working on a few new book projects. He also mentioned a project with Pondo, but couldn't reveal details yet. I can't wait for more info on any project between John and Pondo.

I appreciate John's time and consideration in giving GWSR updates on GFW and his books. You can get more info on John at EatSleepWrestle.com. Follow Girl Fight Wrestling on Facebook and check back here for news and updates on the best women's wrestling. You can watch the video interview at On the Beat With John Cosper. 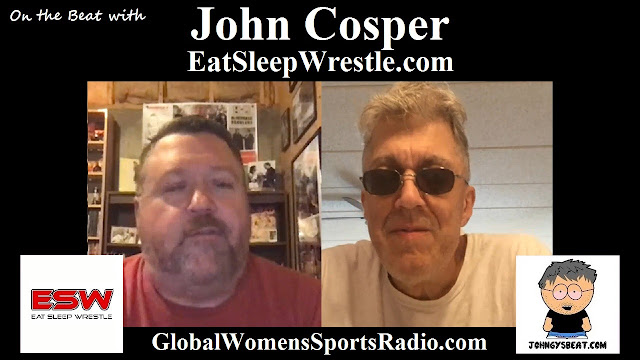