On the Beat With Krysten Muir

Krysten Muir was a kicker on Tempe Marcos de Niza's football team. She was the first female to score a point in an AIA state championship game. Krysten made five of 10 field goal attempts and 98 of 112 extra point attempts for the Padres in 1015 and 2016. As impressive as all of that is, Krysten is doing something even more amazing off the football field.

In January 2021, Krysten was in a horrific car accident. For Krysten, it seems that was just another obstacle for her to overcome.

I had the honor of talking to Krysten about her football career, the accident, her recovery and more. Of all of my interviews, Krysten would certainly be one of the most courageous and inspirational, even if she eschews that type of praise.

Almost immediately after the accident, Krysten knew something was terribly wrong. As the realization of her paralysis set in, Krysten wasted little time in setting her mind on walking again.

Just a few months later, Krysten is making remarkable progress. She still has a way to go to reach her ultimate goal of walking unaided, but each step she takes now is one step closer to that goal, a goal she will no doubt reach.

In the interview Krysten admits she didn't think about the significance of being a female kicker on a football team. In the same way, I don't think she realizes yet the magnitude of what she is accomplishing now. She didn't view either as an insurmountable obstacle. Her mindset was always to just go out and do it.

Even if Krysten is too humble to see what she is accomplishing, her circle or family and friends see it and their support means the world to Krysten. A cousin set up a Go Fund Me page to help with Krysten's medical bills. Seeking help doesn't come easy for Krysten, but she appreciates the outpouring of love she has received.

Krysten's original goal was a career in physical training. Those plans are on hold a bit. Krysten admits she has been encouraged to look into motivational speaking. When I mentioned a possible book, Krysten joked she isn't great at chronicling her journey, but she wouldn't have to be. The actual steps would be secondary to her thoughts. Of course, Krysten has plenty of time to consider all possibilities. Right now her focus is on the finish line of walking.

I really enjoyed talking to Krysten and I asked for an update interview once she has reached her goal of walking. I want to celebrate that victory with her and share it here.. People like Krysten and stories like hers need to be in the spotlight. Krysten has a wonderful story and the best part is still to come.

Check out the interview at On the Beat With Krysten Muir. Check back here for our updates on this inspirational young woman. 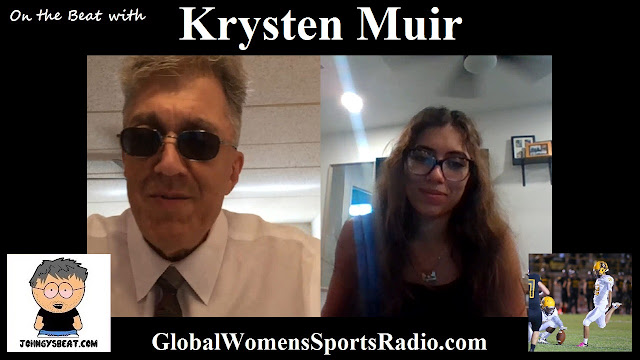 Such a positive girl! Good luck Krysten in your recovery. You have accomplished a lot and more to come!

She's had an amazing recovery.