The Dallas Wings held an off day press session featuring Head Coach Vickie Johnson and players Marina Mabrey and Kayla Thornton. The play of Mabrey and Arike Ogunbowale was a major part of the conversation, but plenty of other topics were also covered.

Coach Johnson started by discussing the team's play in recent games. In winning three of the last four, the Wings have reached 8-8, their first time at .500 in a couple seasons. The Wings are now tied for third place in the Western Conference.

Next, Coach Johnson discussed the play of Mabrey and Ogunbowale, individually and together, as well as their impact on the team on and off the court. Both could be in line for All-Star spots and Mabrey could be looking at the Most Improved Player award.

Mabrey followed Coach Johnson by continuing the discussion about Ogunbowale. She also talked about being  a candidate for the MIP award. She finished by talking about her tole on the team. Whether off the bench or as a starter, Mabrey brings the same attitude and effort.

Thornton was last to talk to the press. She started by reviewing the season so far. Obvious;y at 8-8, she is happy with the success of the team. She then jumped back to the Marbey-Ogunbowale topic. They are important parts of the team on the court, on the bench and off the court. They have a unique chemistry and are great as teammates.

Thornton talked about her role as a team veteran. She is happy to give advice and help the younger players, but all of the veterans on the team do that, as well. Additionally, everyone on the team, including the vets, is happy to listen and take advice from teammates and coaches.

To end the session, Thornton talked about the importance of the final few games leading into the break for the Olympics. At 8-8, it is crucial the team continues to build on that momentum and not let up now. A strong finish to this part of the season is important.

Dallas started the season 1-4, but has turned it around, going 7-4 in their last 11 games. With a new coach and several new players, the team took a bit to come together, but they appear to be on the right track. The Wings return to action on Wednesday hosting the Chicago Sky. They also host the Sky on Friday, then travel to New York and Minnesota, before returning home for a final game with the Las Vegas Aces before the break.

Las Vegas, currently 11-4, is the biggest challenge in that group. The other teams are all within a game of even, which should translate to opportunities for the Wings. Ideally, the Wings win four of the five, but even taking three would be a good end to this part of the season.

That press session can be found at On the Beat With the Dallas Wings 06/28/2021. Check back here for my coverage of the WNBA. 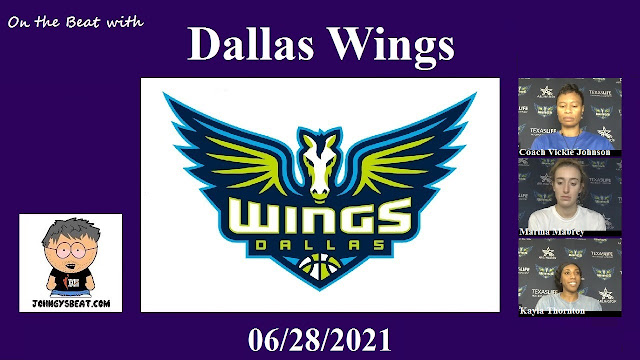