​Just when it looked like the Chicago Sky would end their four game losing streak (all at home), Phoenix's Kia Nurse raced down the court, stepped over the half court line and put up the game-winning three-pointer. The miraculous shot ended a game full of streaks and missed opportunities.

The Sky had a 19-4 run in the third quarter to take the lead. Early in the fourth quarter, the Sky ran off 12 unanswered points to stretch the lead to nine with about five minutes left to play. Phoenix came right back though, with a 14-3 run in the last 3:37, culminating in Nurse's game-winner.

Diamond DeShields led the Sky with 26 points. Ruthy Hebard had 9 boards and Courtney Vandersloot had 10 assists to lead in those categories.

After the game, Phoenix Coach Sandy Brondello and players Nurse, Skylar Diggins-Smith and Megan Walker discussed the game and the game-winning shot. It wasn't planned to be the play, but all were happy with the ultimate outcome.

The Sky fell to 2-5 for the season. They return to action on the road as they face the Mercury again Thursday.

The press session can be found at On the Beat With the Phoenix Mercury 06/01/2021. Check back here, on GlobalTravelerUSA.com, Patch.com and GlobalWomensSportsRadio.com for my WNBA coverage. 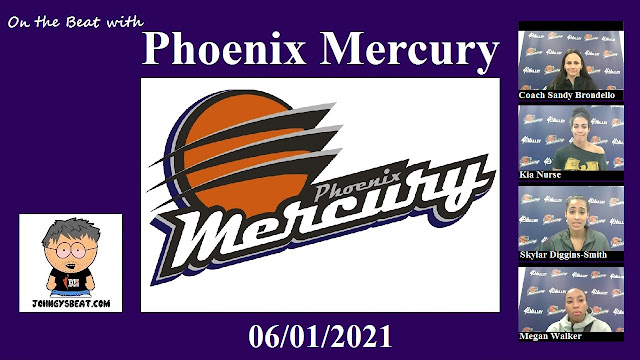