The Seattle Storm announced Head Coach Dan Hughes was retiring and assistant coach Noelle Quinn was replacing him. This was a bit of a surprise, but not a total shocker.

Recently, Hughes skipped a game for his son's graduation. Quinn took the reins for that game. In a press session upon his return, Hughes talked about his changing priorities and the importance of family time.

On the surface, it seemed Hughes was in a good place, finding peace and balance in his life. Listening to Hughes and reflecting on the session, I think Hughes had already made up his mind to leave.

Hughes, 66, has been coaching for 44 years, starting as a grad assistant at Miami (Ohio). He is a two-time WNBA Coach of the Year. He guided the Storm to the WNBA title in 2018. Last season, Hughes took a leave due to health concerns, while the Storm won the title in the Bubble with assistant coach Gary Kloppenburg assuming the head coaching duties.

Quinn was a star at UCLA before being selected by the Minnesota Lynx in the first round (fourth overall) of the 2007 WNBA draft. In her 12 year career, Quinn played for the Lynx, the Los Angeles Sparks, the Washington Mystics, the Storm (twice) and the Phoenix Mercury. In 2019, Quinn was named an assistant coach of the Storm. Last season, she was named associate Head Coach.

In the press session, Coach Quinn discussed the transition to head coach, her style of coaching and the significance of former players becoming coaches. Quinn described herself as a quiet, “servant” leader. She isn't loud, but she doesn't have to be loud to make her point and lead.

Quinn struck me as a very confident, humble person. At just 36 and only three years removed from her playing career, Quinn should have no problem relating to the players. With two years of coaching experience, Quinn has made the transition to coaching. Being head coach comes with more pressure and responsibility, but Quinn is ready for that challenge and I think she will be a great one.

Of course Quinn will be helped by a team that won two championships in the last three seasons and is loaded with talent, including Sue Bird, Breanna Stewart and Jewell Loyd. With that type of talent comes high expectations though. Coach Quinn and the team are ready for the challenges ahead.

Bird followed Quinn in the session. As a star and a longtime vet, Bird gave her opinion of the situation and Quinn. While the coaching situation of the last three seasons might seem a bit unstable, it really is the same system and the same team.

In talking about the impact of a woman coach, Bird made an interesting point. At 25 years, the league is young. It couldn't have former players as coaches in the early years. The emergence of the WNBA, developmental leagues and foreign leagues has allowed many more women the opportunity to play. There are now many more women coach possibilities available.

The subject of women coaching is one I have broached many times in press sessions. With no disrespect to men coaches like Bill Laimbeer and Dan Hughes, I think it is very important for former players in the league to move through the coaching ranks. Also, other former college players and coaches deserve breaks in the WNBA coaching  circuit.

This isn't a sexist thing. It is about growing the league from within. It's about opportunity for women where there once wasn't any. It's about the identity of the WNBA. Making Quinn Head Coach is a great choice and I wish her good luck.

The interview session can be found at On the Beat With the Seattle Storm 05/31/2021. Check back here for my recurring coverage of the WNBA. 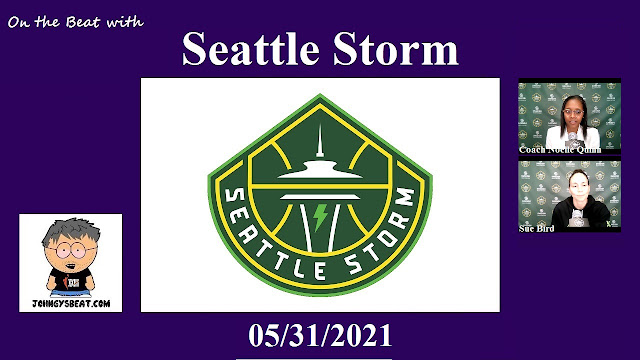