Cards That Never Were is a recurring series in which I create virtual cards of players missed in various sets. It is a concept I have borrowed from far too many to list, but I appreciate all of them. Many of my card creations, as well as a lot of creations from others (not just baseball cards) can be found in the Custom Baseball Cards Facebook group.
Andy Etchebarren made his Major League Baseball debut in 1962 by playing two games for the Baltimore Orioles. In 1963, '64 and most of '65, Etchebarren was in the minors. He made it back to the Orioles for a few September games in '65. He stayed in the majors with Baltimore until he was traded to the California Angels midway through the '75 season. The Milwaukee Brewers purchased Etchebarren after the 1977 season, but he only played four games for them in '78.
For his efforts, Topps gave Etchebarren cards in their sets from 1966 through 1978. His 2 games in '62 and 6 games in '78 weren't enough for Topps to include him in sets the next year. As always, that doesn't mean I can't attempt to correct the omissions.
The '79 Topps card was fairly easy. Severl decent pictures of him with the Brewers are available. The 1963 Topps card proved to be too challenging. Of course, I could have used a lot of pictures of him with the Orioles, but card creations need to be time-relevant in the picture choices. At least I was able to give Etchebarren a"career Capper" card. Unfortunately, Etchebarren passed away last October. 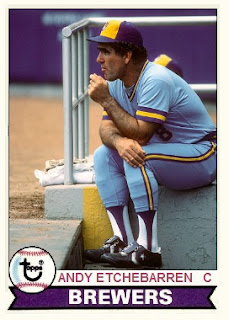 Nicely done. WOW, is it strange to see him in that uniform! I had no idea he was ever a Brewer.

Thanks. I had also forgotten he played for the Angels between the Orioles and Brewers.