Prior to their game against the Washington Mystics, the Chicago Sky held a media session featuring Allie Quigley and Courtney Vandersloot. Much of the discussion focused on the All-Star game, the state of the team and the upcoming break for the Olympics, along with some other interesting topics.

Quigley started the session by talking about the All-Star game and her participation and preparation for the three-point contest. A two-time three-point champ (2017 and 2018), Quigley hasn't done much extra work, but is relying on her regular routine and overall skills.

The conversation turned to how she is feeling in her 14th year. Obviously, she isn't as at her peak like her younger days, but she feels great and is playing at a top level.

Quigley finished her session by talking about the upcoming break and the state of the team. The team will use this time to regroup a bit and focus on the final stretch into the playoffs.

The conversation shifted to second half adjustments for the Sky and what she has learned about the team this season. As always, Vandersloot gave an insightful look at the team. She was fair in her assessment of the inconsistent play of the team this season, but their overall abilities. Echoing Quigley, Vandersloot talked about the tam using the break to refocus and get back on track as they make the push for the playoffs.

The session finished with Vandersloot making a case for Quigley as the Sixth Woman of the Year, an award Quigley has already won twice (2014 and 2015). Quigley's play merits consideration for the award. She also talked about the team supporting Quigley during the three-point contest. Quigley could be a three-time winner of that and the Sixth Woman award.

Unfortunately, the Sky dropped their night game to the Mystics 89-85 in overtime. The Sky finished the first part of the season at 10-10, good for a second place tie with the New York Liberty in the Eastern Conference. The inconsistent Sky had both a winning and losing streak of seven games. They finished the first half losing three of four. They will return to action on Sunday, August 15 when they host the Seattle Storm.

The WNBA All-Star game takes place Wednesday, July 14 at 7 pm (EST). Team WNBA faces Team USA.The Sky will have three players, Kahleah Copper, Courtney Vandersloot and Candace Parker, playing for the WNBA All-Stars against Team USA. Allie Quigley will be one of four participants in the three-point contest. Connecticut's Jonquel Jones, Seattle's Jewell Loyd and New York's Sami Whitcomb are the other three vying for the title. Loyd and Jones are also in the AS game, while Whitcomb is viewed as one of the biggest oversights.

The media session can be found at On the Beat With the Chicago Sky 07/10/2021. Check back here for my recurring coverage of the WNBA. 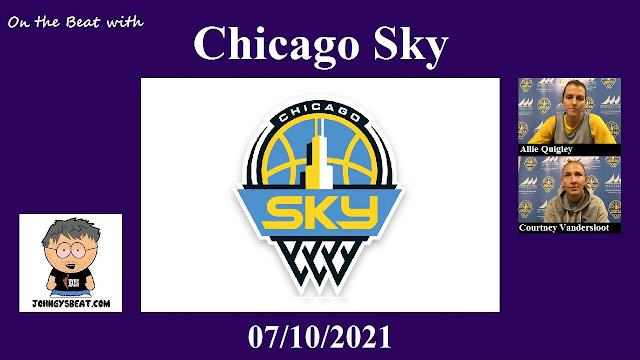