On the Beat With Adam Chalifoux of Hoopstradamus

As Senior Writer for Global Women's Sports Radio, it is obvious I enjoy women's sports. Lately, I have focused mainly on the WNBA season, which is currently on a break for the Olympics.

I thought it would be interesting to get some thoughts about the WNBA from others. I immediately thought of Adam Chalifoux, who runs the Hoopstradamus and Running with the Bulls podcasts. A longtime reporter of basketball, I knew Adam could give an outsider's inside look at the WNBA.

I gave Adam the general outline, but nothing specific, because I wanted this to be natural and not rehearsed. I knew Adam had enough knowledge and interest to lend insight to a few major WNBA topics.

We started with a general overview of the league and its popularity. Adam made some great points. Everyone wants to compare the WNBA to the NBA, but the WNBA is only 25 years old. When the NBA was 25 years old (even even much more recently), it was far less popular than it is now. When I was growing up, the NBA championship series was on tape delay well beyond my bedtime. It wasn't until Bird, Magic and Jordan led the league to mass popularity, that the NBA stepped up to the true level of a major sport.

The conversation progressed to expansion and again Adam had an interesting point. While the WNBA is mostly in cities with NBA teams, three of the most successful teams (Connecticut Sun, Las Vegas Aces and Seattle Storm) are in cities without teams. Furthermore, Connecticut has no other major pro sports team. This should be the area of interest for the WNBA. Find smaller cities without major sports or even entertainment. The WNBA might be able to thrive in those cities, as opposed to being in a crowded field of entertainment options. While I have been against WNBA expansion, this concept made me rethink my stance.

The usual argument for expansion is the amount of great players available. This I certainly true, but a surplus of players doesn't justify adding teams in a league struggling to find its audience. Adding teams in lesser markets could be an alternative. In a league with a trail of abandoned bigger cities (Cleveland, Detroit, Houston, Miami, Charlotte, Orlando, etc), maybe it's time to look in a different direction.

We talked about the WNBA showcasing the personalities of the players. The NBA does a great job with promoting their players. The WNBA needs to let the fans see the personalities of players like Breanna Stewart, Liz Cambage, Kia Nurse and more. The press recently saw Connecticut's Natisha Hiedeman “take over” a media session. It was fantastic fun, while still providing serious answers to questions from reporters. Unfortunately, most fans didn't get to see that (unless you follow GWSR, because we showed it). These women could be every bit as big of stars as the men, if they are given the platform.

I have long stated the WNBA needs more women coaches. I mean no disrespect to great coaches like Bill Laimbeer and Curt Miller. They certainly are excelling, but for the overall growth of the league and the advancement of women, more women need to be in charge. There is a push for women to coach in the NBA, but meanwhile the WNBA championship series last season feature two men coaches. Women players need to have coaching opportunities starting in their own league. Grow it from within.

When it came to predictions, we were both a bit predictable (pardon the pun). Las Vegas and Seattle are the class of the league and a rematch in the championship series is a good bet. Adam did pick a darkhorse, as did I. We also discussed the streaky Chicago Sky, who should be in the conversation, but aren't yet.

Lastly, Adam gave his favorite players in the league. As he was naming his, I was thinking of mine, but honestly I would be hard-pressed to pick my top five. Mine change after each press session, because ei see the players in new lights every time. I am also biased towards my Chicago Sky and the aforementioned Hiedeman, whom I covered at Marquette.

I really enjoyed diving into the WNBA with Adam. Because the WNBA is not necessarily his main focus, I knew Adam would give a unique perspective because of his overall basketball acumen. I am also hoping Adam gained a new, deeper appreciation for the WNBA through the discussion. I'm even hoping he features the WNBA more on his Hoopstradamus podcast (hint: bring on Johngy as a guest sometime).

Adam does a great job with both Hoopstradamus and Running with the Bulls. If you're a basketball fan, you'll enjoy both. You might even hear me pop up sometime.

Our interview can be found at On the Beat With Adam Chalifoux of Hoopstradamus. Also, be sure to look for Running With the Bulls and Hoopstradamus on all major podcast platforms. 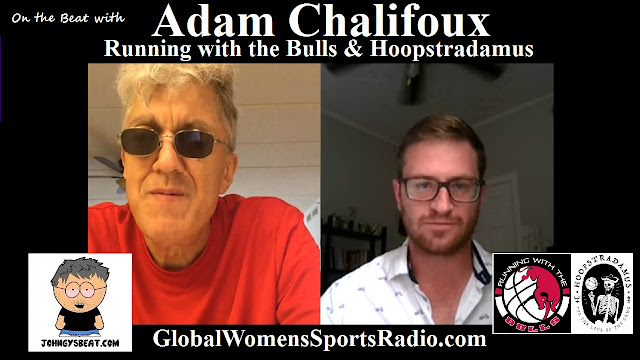