The New York Liberty held a press session featuring Rebecca Allen and Kylee Shook. For a game day, there was surprisingly little talkof the game against Atlanta later that night.

Allen started the session discussing how she is feeling. Despite being better, Allen ultimately did not play last night in the loss.

Allen and Shook both addressed Sami Whitcomb's case for an All-Star spot. The players listed her strengths and built solid cases for her inclusion, although they admitted the roster is limited and making the team will be tough.

Following the statements from Coach Walt Hopkins, New York's practices have picked up the intensity a bit. With fewer off days of late, the practices have focused more on game situations.

Lastly, Allen talked about playing in the Olympics. Splitting her focus between the Liberty and Team Australia isn't anything new for Allen, nor for any player, as many players have split their focus between two teams/leagues.

Shook was up next talking about her season. While she is happy with her play so far, her goal is always to play better. There was special mention of her rebounding of late. She revealed her thought process on rebounding.

She closed out the session reflecting on what she learned last season and brought into this season. Shook gave insight into lessons learned that make her a better player this year.

New York went into last night's game even at 8-8. Their loss left only four teams in the WNBA with a winning record. New York has lost three of their last four games. They return to action on Saturday as they host the Washington Mystics. Three of their final four games before the break are at home and only their game hosting Connecticut is against an opponent with a winning record. New York needs to stop the streak and go into the break on a winning note.

The media session can be found at On the Beat With the New York Liberty 06/29/2021. Also, check back here for my recurring coverage of the WNBA. 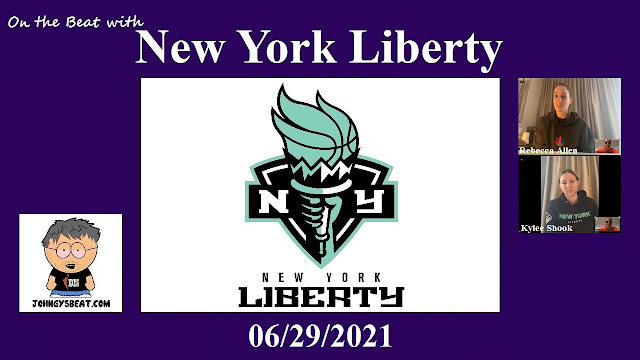