Team Mexico finished 2-4 in the Olympics. They lost to Team Canada in the Bronze medal game. One of teh stars on Mexico was Brittany Cervantes, my first on field interview with the Chicago Bandits. That interview can be found at On the Beat With Brittany Cervantes. For that alone, she will always be special to me, but that's only a small part of why I like Cerv.

Cerv starred at the University of Kentucky. She is the only player in school history to hit 10 or more home runs in each of her four seasons. Despite her excellent career at Kentucky, Cerv somehow went undrafted in National Pro Fastpitch. Still, she earned a spot via open tryouts in 2012.

With the Bandits, she won two Cowles Cup championships (2015 and 2016). She was named the NPF Offensive Player of the Year in 2015, while hitting .358 and leading the league in slugging and on base percentage. In 2016, she was named MVP of the Cowles Cup Championship Tournament.

After the 2016 season, Cerv was traded to the Scrap Yard Dawgs, where she won her third straight championship. In 2019, while playing for the USSA Pride, she earned her fourth championship. In short, Cerv is a winner.

In addition to her on field accomplishments, she was one of the most popular players with the Bandits. Even coming back as an opponent, Cerv was cheered big time.

For Team Mexico in the Olympics, she went 5-15 with two runs, two RBIs and one home run. Her .333 average ranked fifth among Olympian regulars.

Cerv started her coaching journey at Kentucky as an assistant in 2013. After a stint at Loyola in Chicago, she returned to Kentucky, where she is currently Director of Softball Operations.

It was so good to see Cerv on the international platform. I have talked to her at several games since she left the Bandits, but I haven't interviewed her in years. I need to change that next season. 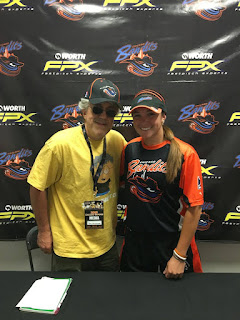 Brittany Cervantes and me in Rosemont, IL-Summer 2016.
Posted by Johngy at 6:00 AM