On the Beat With Athletes Unlimited 2021 Week 3 Part 2

Yesterday, I featured Part 1 of the Athletes Unlimited Week 3 media session. Today I am featuring Part 2 of that session.

I split the sessions into two features for two reasons. First and most important, hopefully it gives a little more exposure to the great causes they women athletes are promoting and helping.

As I wrote yesterday, the players get paid based on team and individual performance. Part of that unique setup has a set [percentage going to the charity of each payer's choosing. This is unprecedented. An entire league giving to various causes from money in the league pool is such a beautiful thing. These causes aren't arbitrary either. As you can see in the media sessions, these players have passion and involvement in the causes.

Secondly, I want to thank the folks at AU for asking this question in my absence while I was on a different assignment. Essentially they did my job for me, but more importantly, they continued the mission to raise awareness to the causes and what player's are doing.

The AU Pro Sports leagues are unique in many ways. This is a special thing just in its infancy. I have been on the bandwagon from day one and I hope to encourage others to get on board! There really is nothing like it.

That media session is at On the Beat With Athletes Unlimited 2021 Week 3 Part 2. Also, go to AUProSports.com for more info on the players, their causes and the league. 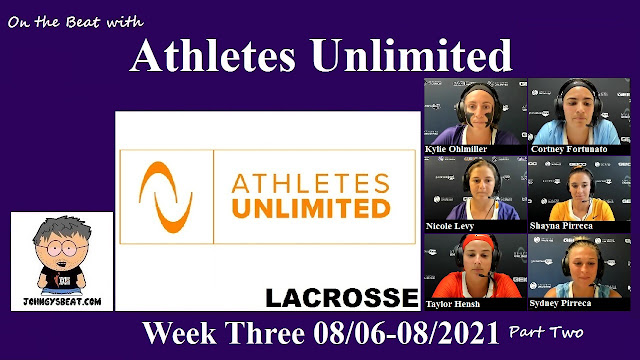