Celebrity Jersey Cards is a weekly series in which I create virtual trading cards for celebrities wearing sports jerseys. We continue marching our way alphabetically through Major League Baseball.

Tennessee native Mack Brown has been coaching football on the collegiate level for almost 50 years. Starting as an assistant at Florida State to his current position as Head Coach at North Carolina, Brown has built a legendary career, compiling a 259-132-1 record. Brown threw put a ceremonial pitch to get his Celebrity Jersey Card. His #1 jersey was most notably worn by Elvis Andrus, but in a nod to his coaching background, I'm going with Manager Billy Martin. 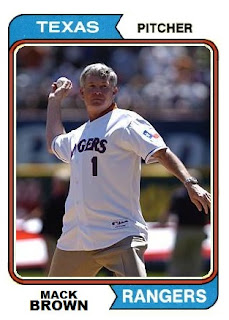 Born in California, Kim Mulkey was an Olympic Gold medallist in 1984 and she became the first person in NCAA women's basketball history to win a national championship as a player, assistant coach, and head coach. Currently the Head Coach at Baylor, she led her team to the Elite Eight last season. She has a career record of 631-104. Mulkey tossed a first pitch for the Rangers to earn a Celebrity Jersey Card. She gets extra points for a Texas cap, although I don't think it is an official cap. 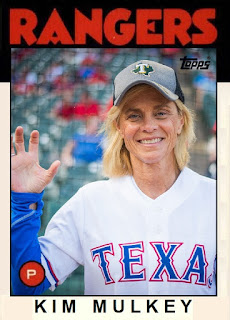