Both players discussed the team playing through an injury to Skylar Diggins-Smith. Early in Tuesday's game, Diggins-Smith sprained her ankle, forcing her to leave the game. The extent of the injury hasn't been revealed, but Diggins-Smith was listed as "questionable" for the game against the Mystics. In her absence, the Mercury relied on team basketball to defeat the Indiana Fever. Still, the Mercury only won by four points against the league worst Fever. (Diggins-Smith played 30 minutes and scored 17 points, seemingly healthy).

Cunningham also discussed her injury. She said it was just a sore calf and wasn't going to be an issue.

The break for the Olympics was also a main topic. Both players talked about using the break to work on their game. The players had a short break, but spent most of it in practices, waiting for the Olympians to return.

Nurse discussed Diana Taurasi and Brittney Griner taking the lead in Diggins-Smith's absence. Those two are great players, but it was also a team effort, with everyone stepping up.

Lastly, Nurse expressed her excitement over the release of her Jordan brand shoes. She did not give us a sneak peak, but all would be revealed in the game later today. Nurse explained the significant role her grandparents play in relation to the shoes. It was clear how much it meant to her to incorporate her grandparents into the shoe design.

The Mercury, at 12-10. Two straight wins put the Mercury above .500 for the first time this season. They beat the Washington Mystics, who are 8-13. Phoenix currently sits in fourth place in the Western Conference and fifth place overall in the WNBA.

That media session can be found at On the Beat With the Phoenix Mercury 08/19/2021. Check WNBA.com for news and info on the Mercury and the rest of the league. 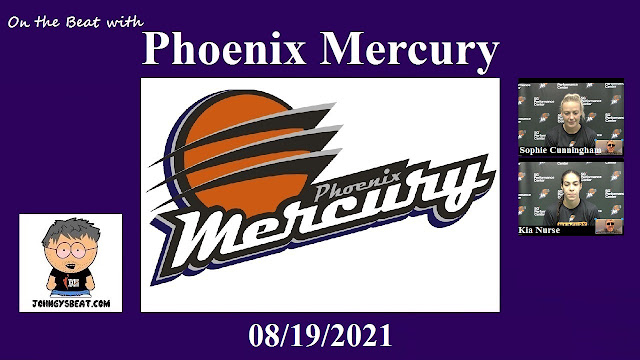