On the Beat With Stacey McManus of Team Australia Softball

I first met softball player Stacey McManus when she was one of eight Australians who joined the National Pro Fastpitch Chicago Bandits in 2017. The Aussie Eight came to the NPF as part of their preparation for the Olympics.

The next season, the Aussie Eight were joined by other members of the Australia women's national team as the Aussie Spirit in the NPF. In 2019, they became the Aussie Peppers.

Other countries fielded full or partial teams, including Canada, Mexico and China. The unique situation allowed those players to test themselves, while giving an international flavor and exposure to the NPF.

The Aussie Eight quickly became part of Bandit Nation, as did their family and friends. Bandit Nation suddenly expanded across the globe to Australia.

I had the pleasure of interviewing all eight players that first year. It was such a cool experience to talk about softball and other fun topics with elite international athletes. They all could not have been any nicer.

Stacey began her career at the tender age of four. Having both parents playing softball, it seemed the natural path for her and her younger sister Brooke. Stacey's onfield accomplishments are numerous, including seven Gilley's Shield (Open Women's National Championship) titles and two junior titles. Stacey has represented Australia at four World Championships. Most recently, Stacey played in the Olympics, the grandest stage of them all.

Her time in the NPF helped prepare Stacey and her mates for the Olympics, but nothing could prepare them for the uncertainty of the last year. The Olympics eventually got postponed to this year, but even that was a bit tenuous right up until the games were actually played. All of that angst got washed away though when softball opened the Olympic games.

I can't begin to imagine the emotion Stacey and the others had. I had chills just watching and cheering for them. Over the fours years I have known them, I have become an adopted Aussie and part of their Chicago cheering contingent.

Yesterday, in a joint effort of Global Women's Sports Radio and The Johngy OR Else Podcast, Tommy Else and I interviewed Stacey direct from Australia and recently returned from Tokyo. We talked to Stacey about her time in the NPF, the Olympics, Athletes Unlimited softball, her future and much more. She gave us fantastic first person insight.

We are grateful to Stacey for her time and consideration. We wish Stacey the best of luck wherever her career takes her and we will be watching and cheering. Our interview can be found at On the Beat With Stacey McManus of Team Australia Softball. 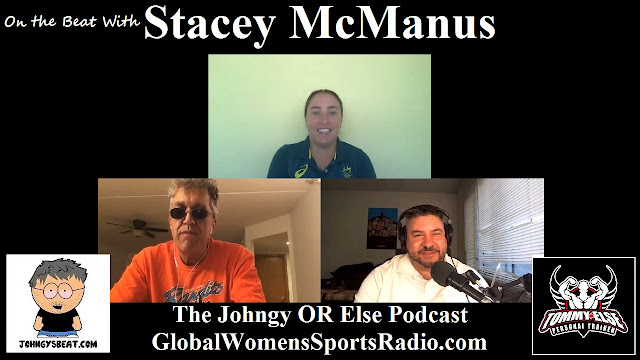