Patrick Mahomes is a second generation athlete. Patrick's father Pat pitched for several teams during a 12 year MLB career. Selected by the Kansas City Chiefs with the 10th pick in the 2017 NFL Draft and has since led them to a Super Bowl victory. After four seasons, he has a 38-8 winning record and is already being compared to the greatest QBs of all time. Patrick tossed a first pitch for the Kansas City Royals to earn his Celebrity Jersey Card. I am sure it was on target. 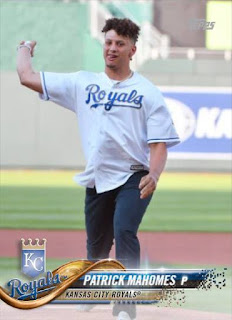 Born in California, Alex Morgan Morgan attended UC Berkeley, where she played for the California Golden Bears from 2007 to 2010. She has played for several teams professionally, as well as Team USA. Among her many awards, Morgan won a Gold Medal at the 2012 Olympics. Morgan was given the nickname "Baby Horse" by her teammates on the U.S. women's national team for her speed, running style, and youth. Morgan earned her Celebrity Jersey Card while throwing a ceremonial pitch for the Royals. 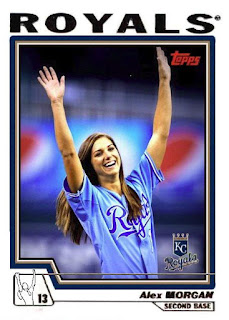 Love me some Alex Morgan!