Coach Johnson started by discussing the playoffs. As expected, she stated making the playoffs is great, but it's only the start. It's not enough to simply make the playoffs. While I agree with Coach Johnsopn in theory, guiding the Wings to a playoff berth in her first season is quite an accomplishment and bodes well for the future.

I asked Coach Johnson about dealing with a losing stretch. The Wings went through a 2-6 skid in July and August. During stretches like that, when does a Coach shake up things versus stayibgthe course? Coach Johnson gave her insight. I still wonder if the streak went longer what would have happened. Fortunately for the Wings, they were able to get back on track.

Finally, I asked Coach Johnson about a sandwich named after her at the Carnegie Deli in New York years ago. She chuckled a bit and stated she did enjoy the sandwich, but she had a slimmed down version of the 3,000 calorie monster.

Next up, Harris talked about lessons from this season. Harris is having a similar season to her last, mostly coming off the bench, but providing a solid contribution.

Last was Mabrey. I asked her to talk about her clothing line, which she gladly did. All of her products can be found on MarinaMabrey3.com.

Dallas is 13-18, in fifth place of the WNBA Western Conference. With the league reseeding in the playoffs, in the first round, Dallas will face the Chicago Sky, who will finish in second place of the Eastern Conference. It's a single elimination game in Chicago. Despite home court and a slightly better record, I think the Sky will be a low points favorite.

The media session can be found at On the Beat With the Dallas Wings 09/16/2021. Go to WNBA.com for more news on the Wings and the league. Also, return here for more coverage. 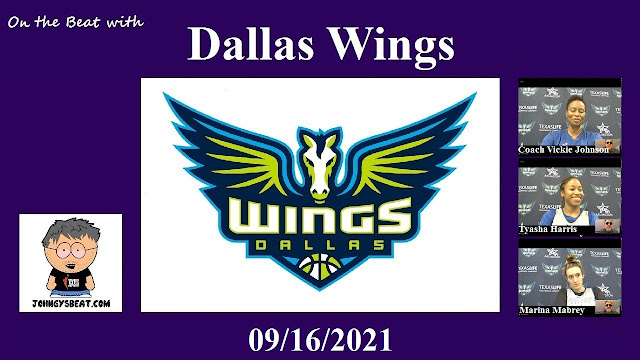