Ocasio led her Team Gold to a 2-1 record, the same as Sahvanna Jaquish and Team Purple. Amanda Chidester's Team Orange and Carrie Eberle's Team Blue went 1-2 over the weekend.

The end result left Ocasio with 2,096 points to take the title. Chidester finished with 1,714, Kelsey Stewart with 1,612 and Eberle 1,592. In fifth was last year's champ Cat Osterman with 1,586. Osterman had a big jump from 13th place the previous week (but more on that in tomorrow's feature on Osterman on Global Women's Sports Radio).

Congrats to Ocasio, the other award winners and all of the athletes. Thank you to AU for access and hospitality all season. We look forward to AU Softball 2022! 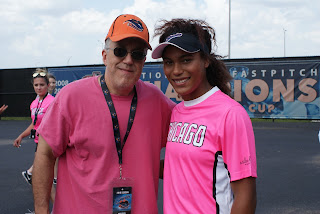