On the Beat With Athletes Unlimited Softball Week Four

Despite her team going 3-0, Chiddy actually dropped one spot in the standings and now trails new leader Aleshia Ocasio by 52 points. Newcomer to the top four is Carrie Eberle with 1,378 points. Rounding out the top four spots is Sahvanna Jaquish, who dropped two spots, with 1,336. Osterman dropped to 12th place with 1,186. While it is possible to jump a lot of places (see Eberle's jump of 16 places), I don't see Osterman rebounding that much. I think it's Ocasio's time to win it all.

On her way to her big vault in the standings, Eberle picked up two MVP awards. Alyssa Denham and Anissa Urtez finished in the top three for two of the games.

Go to AUProSports.com for more info on all of AU leagues. Check back here for my continuing coverage of all AU Sports. 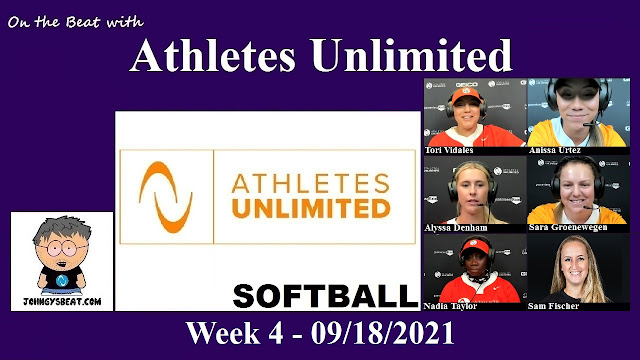