The WNBA Atlanta Dream announced Morgan Shaw Parker as new Team President and Chief Operating Officer. The team held a press session featuring Owner and Chairman Larry Gottesdiener, Co-Owner and Vice-President Renee Montgomery and Shaw Parker. That media session can be found at On the Beat With the Atlanta Dream 09/08/2021.

In her role as President and COO of the Dream, Shaw Parker will oversee day-to-day business operations and revenue growth. She will manage sponsorships, ticketing, retail, marketing, digital, in-game experience, human resources, community engagement and research and analytics. She will work closely with owners Larry Gottesdiener, Suzanne Abair and Renee Montgomery.

Montgomery was bursting with enthusiasm in the press session. “I am ecstatic to welcome Morgan to the Atlanta Dream family. Her enthusiasm for making an impact on the City of Atlanta is exactly the kind of leadership we need. I can’t wait to collaborate with Morgan to boost our players’ visibility in the community, to continue earning the respect of our city, and to make sure that the game we love is accessible to all those who want to be part of the WNBA experience.”

Gottesdiener added, “Morgan Shaw Parker is an absolute force in the sports industry, and she will be a true game-changer for the Atlanta Dream. Morgan’s genuine, thoughtful professionalism was an instant fit for our culture, and her passion for women’s sports matches our own.”

Shaw Parker was obviously just excited to get started. “It is an incredible honor to join the WNBA and the Atlanta Dream, an organization whose new leadership celebrates its players and embraces their powerful roles both on the court and in the Atlanta community. I have proactively championed women’s sports throughout my entire career and there’s no better time than now for me to take an active leadership role to shine a spotlight on these amazing athletes. I’m committed to working as hard as our athletes do to build an authentic brand that empowers women, represents the city, and exemplifies how a model professional sports franchise should be run.”

With more than 25 years experience of leadership at all levels of the sports industry, Shaw Parker looks to bring much-needed stability to the Dream organization, as well as marketing and communications strategies. Among her other positions, Shaw Parker was with Nike for more than a decade and the Kansas City Chiefs for five years, in addition to sports marketing agencies for several years. She was named as one of its “2019 Most Powerful Women in Sports” by AdWeek.

Shaw Parker's appointment is the latest in a series of changes within the organization, which included a new ownership group. Montgomery is the first former player to become both an owner and executive in the WNBA. In the middle of the many changes, the Dream was named the 2020 ESPN Sports Humanitarian Team of the Year for the work the players did towards the social justice and change movements.

The Dream, stand at 7-21 with four games remaining. They travel to DC, then host Indiana and Los Angeles, before finishing the season in Connecticut. They lead Indiana by half a game in the race to avoid the league's worst record. Washington and LA are both three games ahead of Atlanta.

While this has been a disappointing season for Atlanta, Shaw Parker joining the organization is one more move in the right direction to get Atlanta back on track. With new ownership and upper management in place, brighter days are ahead for the Dream. 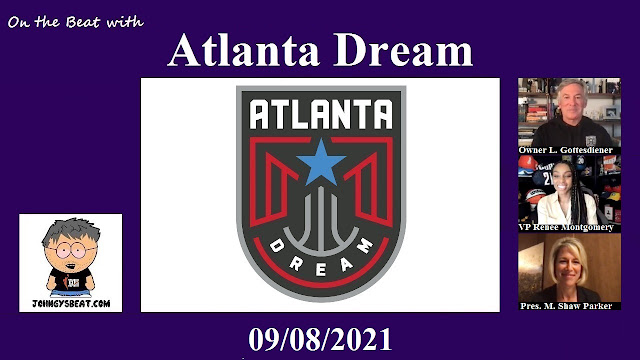