On the Beat With Marla McKenna

Author Marla McKenna's first book, Mom's Big Catch, was inspired by a real life incident at a Milwaukee Brewers game. She didn't know it at the time, but one game, one moment even, totally changed her life.

Mom's Big Catch is the story of the pursuit of catching a ball at a Brewers game. The title might be a clue as to what happens, but I am not giving out any of the story. You have to buy the book to find out.

Written for children, Mom's Big Catch can also be enjoyed by adults as a quick, fun read. It's also customizable for any team. With a special editions featuring the Brewers, the Chicago Cubs and other teams, Mom's Big Catch is also interesting to team collectors.

One added bonus is partial proceeds from Marla’s books benefit the Linda Blair WorldHeart Foundation and legendary musician Rick Springfield matches the donations. The story on how this came to be is fascinating, as you will hear in the interview below.

Marla was just getting started though. Next came Sadie's Big Steal, I'm A Secret Superhero and A Soccer Summer Dream with The Milwaukee Torrent.  I like how Marla weaves in some important issues, like bullying, without being preachy. Marla presents life lessons in entertaining ways within the stories.

Not leaving children's books behind, Marla turned her attention to more serious topics. Our Last Day in Heaven (co-written with Alex Hoffman and Michael Nicloy) and Manifesting Your Dreams were her next two books.

Having interviewed Marla several years ago and following her career since, it was time for an update interview with her. Marla talked about her books, her love of sports, meeting her sports heroes, being a woman writer and much more.

It was such a pleasure talking to Marla. She has a real passion for writing and giving. She has a genuine appreciation for the teams (like the Brewers, Cubs, Torrent and more) and players (like Fergie Jenkins, Rollie Fingers, Geoff Jenkins, Paul Molitor and many more) who have been involved in her career.

I tried to get a scoop on Marla's next project. She assured me she has ideas, but did not reveal them yet. Whatever she does, I am sure will be highly enjoyable.

It might be a case of art imitating life for Marla. She is a great example of manifesting your dreams. In a feature on Oprah Daily last year, Marla stated, “The easiest way to manifest anything is to be clear about what you want. Don’t give the universe mixed signals... and take action. Working toward your goals is imperative.” Marla did all that and more and the results are six great books with more to come.

The interview is at On the Beat With Marla McKenna. After you watch our interview, you can learn more about Marla at MarlaMcKenna.com. She cautions it is a bit under construction, but it still has a lot of great info. Soon, it will be even better. Also, follow Marla on all social media platforms.

On of the real joys of what I do is meeting people like Marla and spreading the news. She's a positive person with interesting stories to tell. I am going to continue following her career developments and I encourage all to do so, too.

Thank you to Marla for her time and consideration. Thanks, also, for providing great fun for all sports fans, young and old.. 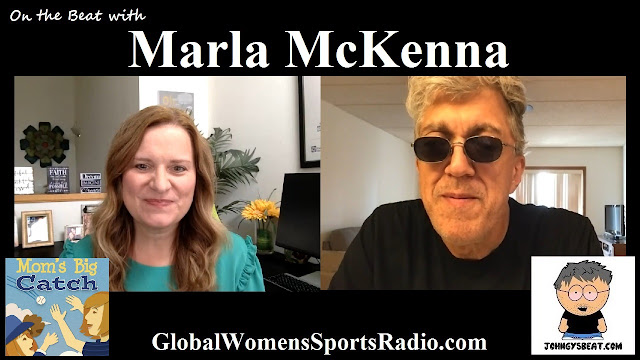