Cards That Never Were is a recurring series in which I create virtual trading cards for players missed in various sets. It is a concept I have borrowed from far too many to list, but I appreciate all of their efforts. More of my creations and many great creations of others can be found in the Custom Baseball Cards Facebook group (and not just baseball cards).
After playing college ball at New Mexico Highlands, Carl Garrett was selected by the Boston Patriots in the 3rd round of the 1969 NFL draft. Garrett played four seasons with the Pats, two with the Chicago Bears, one with the New York Jets and two with the Oakland Raiders. In his nine seasons, he rushed for 4,197 yards for a 4.1 yards average and 28 TDs. He also caught 182 passes for 1,931 yards and 7 TDs.
For his efforts, Topps made a card for Garrett from 1971-'76. That left 1970, '77 and '78. I easily found pics of Garrett with the Raiders, but the Patriots were more challenging. Still, I managed to make it all work and complete the series for Garrett. 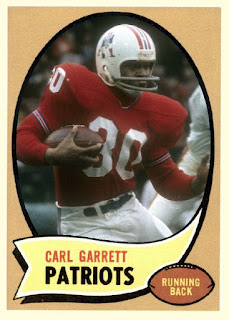 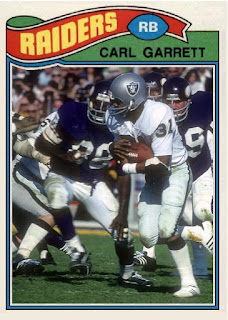 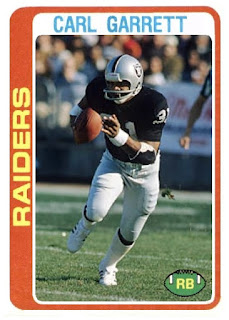