Celebrity Jersey Cards is a weekly series in which I create virtual trading cards of celebrities wearing sports jerseys. Today, the Sky is the limit as we are nearing the end of our alphabetical journey through all MLB teams.

The daughter of former MLB player Delino DeShields, Diamond DeShields is a second generation cross-sports athlete. With brother Delino Jr., she is also part of a cross-sports sibling pair. After a successful collegiate basketball career at North Carolina and Tennessee, Diamond was selected by the Chicago Sky in the 2017 WNBA Draft. In three seasons with the Sky,she has averaged 13.9 points per game. Diamond took to the field at a CChicago White Sox game when her brother was in town playing with the Rangers. I'm pretty sure this is the first brother-sister athlete combo on a Celebrity Jersey Card. 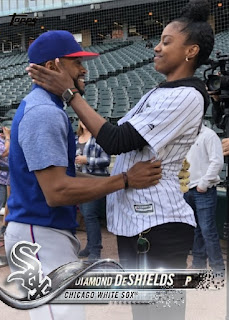 Fellow WNBA star Katie Lou Samuelson played collegiately at UConn. She was selected by the Chicago Sky in the 2019 WNBA Draft. After one season with the Sky, she was traded to the Dallas Wings. In her two seasons, she has averaged 3.8 points per game. Her sister Karlie played in the WNBA with the Los Angeles Sparks and Dallas Wings. Like her former teammate DeShields, Samuelson earned her Celebrity Jersey Card on the field at a White Sox game. 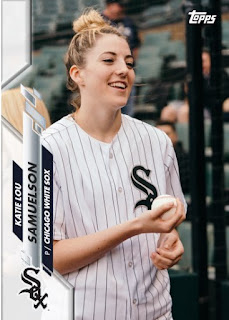