Excuuuuuuuse me! Yes, I had to start this with Vickie Guerrero's famous catchphrase.

Guerrero had an unlikely, but undeniable rise to stardom in the WWE. The seldom seen wife of the late Eddie Guerrero, Vickie only started getting an onscreen role after his death. She took that role and made it a major success. usually as the heal manager, GM, advisor or other, Vickie played her part well. She was one the fans loved to hate (or hated to love).

My pal Tony met Vickie at the Squared Circle Expo in May 2021. I actually witnessed this meeting, as I had also just met her. I hate to break the character's reputation, but the real Vickie was as sweet as could be. She even did her famous screeching catchphrase several times for fans.

The SCX was a great time. It had so many wrestling legends, many who haven't done a lot of other appearances.

Aside from those wrestling legends, SCX was also a place for me to reconnect with great friends like Tony. I hadn't seen him since the pandemic. SCX was a bit of a return to normalcy for may of us. I might not see Tony that often, but seeing him at conventions like this is always one of the highlights.

Go to SquaredCircleX.com for more info on next year's event. It's not too early to start planning a trip to SCX III.

Tony doesn't have a website, but you can probably meet him in person at the SCE II and other such events. He's not a wrestling legend, but he is legendary nonetheless. 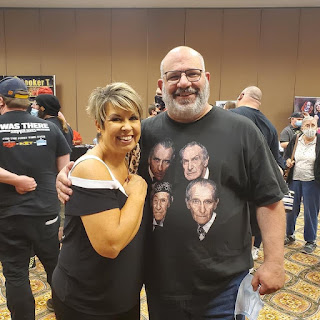