New Jersey native Lou Costello found great fame as part of the Abbott and Costello comedy duo. Their "Who's On First" routine is legendary and is recognized in the Baseball Hall of Fame. Costello, Abbott and Joe Dimaggio had fun representing all three New York teams (at the time). Abbott already had a Giants CJC and now Costello is immortalized on his own Celebrity Jersey Card. 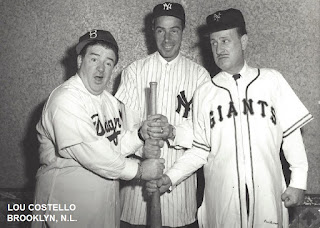 Born in the 1800s in New York, Jimmy Durante went on to a legendary entertainment career. "The Schnozz" was famous for his unique nose, but his talents went well beyond his facial features. A noted fan of the Dodgers, Durante earned a Celebrity Jersey Card (one of the oldest) while having fun with Roy Campanella and Jackie Robinson. 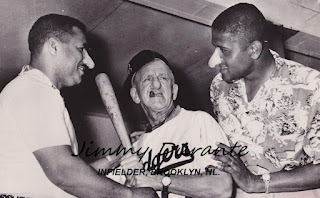