On the Beat With Coach Tamara Inoue

Earlier this week, I had the pleasure of interviewing Tamara Inoue, Head Coach of UC Irvine Women's basketball team, for Global Women's Sports Radio. Our interview can be found at On the Beat With Tamara Inoue.

Coach Inoue is in her sixth season leading the UC Irvine women's basketball program. Despite the time crunch of a busy pre-season schedule, Coach Inoue was gracious enough to give me her time for an interview.

Coach Inoue took over the UCI program for the 2016-17 season, inheriting a team that won 12 games over the previous two seasons. In her first season leading the Anteaters, the team went 5-26. The team quickly found success though, going 65-52 in the next four seasons, including reaching the Big West Tournament championship game last season. For her efforts last season, Inoue was named 2020-21 Big West Co-Coach of the Year.

Inoue had an interesting patch to UCI. A player at Laguna Hills High School, she was later inducted into the Hawks' Hall of Fame. She went on to play at Long Beach State University and also earned a degree in Criminal Justice. She then went to Australia to play and coach for six years. An injury cut short her playing career, but not her coaching. She earned Coach of the Year honors in Australia's Victorian Basketball League in 2006-07 and won the national championship the next season. Returning to the United States, Inoue had a couple coaching stints prior to joining UCI.

In our interview, Coach Inoue discussed her start in coaching, her Australian experience, her biggest coaching challenge, recruiting and more. She also gave a scouting report on the Anteaters. Of course, Coach Inoue did not make predictions, but coming off a second place finish with a conference record of 11-4, (15-9 overall), the Anteaters should be in the Big West title race again. Coach Inoue did say her team is young and the early season will be tough, but she likes it that way.

The Anteaters open the 2021-22 season on Tuesday, November 9 hosting Westcliff University. They have two more home games against Southern Utah and San Diego State before they hit the road.

I greatly appreciate Coach Inoue's time in giving us this interview. We plan to get an update from Coach Inoue during the season. Until then, we wish much success to the Anteaters. 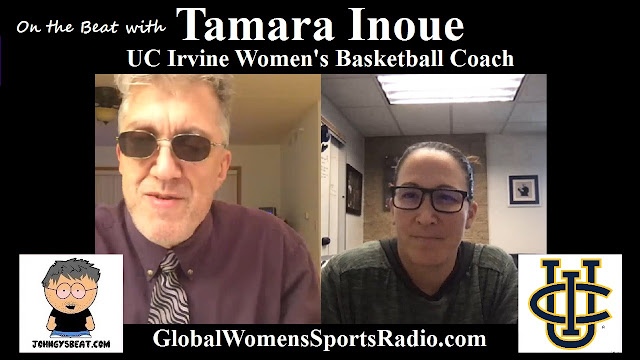