On the Beat With Gianna Belcastro at Wizard World 2021

Gianna Belcastro and her Women's Sports Matter podcast have been on my radar for a while now. I wanted to talk to Gianna about her projects and this weekend at Wizard World, I had the perfect opportunity to do just that.

Early Saturday morning, 19-year old Gianna seated herself on the Main Stage at Wizard World and proceeded to talk, inform and entertain the crowd for 45 minutes. Calm and poised, Gianna said she was nervous, but it didn't show as she seamlessly wove personal stories into women's sports talk. Gianna discussed Athletes Unlimited, the WNBA and other women's sports.

I was totally interested for the entirety of her live podcast, but an even bigger testimony could be found in Joey Roth, who joined me for interviews at Wizard World. More of a novice when it comes to women's sports, Joey was full of praise for Gianna. Joey even stated he would spread the word on Women's Sports Matter to his 14-year old daughter. Just like that, Gianna gained two more fans, along with several others attending her live podcast.

After the podcast, Gianna was kind enough to give us several minutes of her time to do an introductory interview with her. Joey asked Gianna about her start, her passions, women's sports gaining popularity and more.

Joey called Gianna "The future face of women's sports" and that is an apt title. At 19, she is already entrenching herself in the world of women's sports and gaining a following. She has gotten some big names on her podcast already. Volleyball star Jordan Larson doesn't give interviews to just anyone. Yet, Gianna got her and several others, because she knows her stuff.

Much like I keep stating the WNBA needs to develop more ex-players into coaches, women's sports needs young, bright women like Gianna as part of the media. I cover a lot of women's sports and I spread the word to anyone who will listen, but a media person like Gianna is a great role model for young women athletes and journalists.

Gianna is still early in her journey. Life can take odd turns. Who knows where life will lead Gianna? Her future is bright and I hope it is in women's sports media. Gianna can go far in the media. Women's sports and all of its fans will benefit!

Thank you to the fine folks at Wizard World for granting me access. Thanks to Joey for contributing to this interview. Finally and most important, thanks to Gianna for her time and for all she does for women's sports. Look for the Women's Sports Matter podcast on most major podcast platforms.

Our interview can be found at On the Beat With Gianna Belcastro at Wizard World 2021. Give it a listen, then go to the Women's Sports Matter podcast and binge-listen! 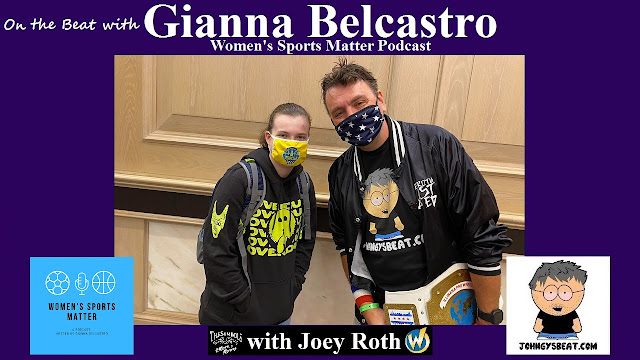