Celebrity Jersey Cards is a weekly series in which I create virtual trading cards for celebrities wearing sports jerseys. It's a musical theme today.

Born in Los Angeles, CA, Katharine McPhee was the runner-up on the fifth season of American Idol. Her self-titled first album debuted at number two on the Billboard 200. McPhee has also embarked on an acting career. She eanrd her Celebrity Jersey Card when she sang the National Anthem at a Chargers game, wearing #96, most notably worn by Balise Winter. 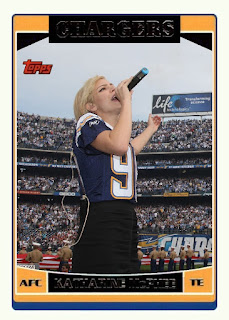 Steve Wariner started his musical career backing up others, before going solo. He has had several singles reach the top ten of the Billboard Hot Country songs chart. Wariner sang the National Anthem for the Titans to earn his Celebrity Jersey Card. The #10 jersey has an interesting history for the team.Originally worm by QB Lynn Dickey, it was also the jersey of Craig Bradshaw (brother fo Terry)m Oliver Luck (father of Andrew) and a few others, but most notably Vince Young. 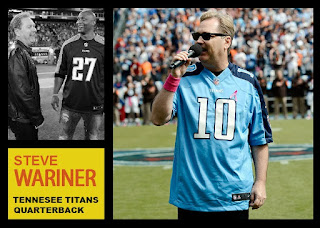