The Round Rock Express, Triple A affiliate of the Texas Rangers, had a Cat Osterman promotion last season. Cat bobbleheads were given to fans.

I have covered Cat's career for years, from National Pro Fastpitch to the Olympics to Athletes Unlimited. Cat retired after the AU season, with her legacy as one of the all time greats!

When I heard about the promotion, I set out to get one for my collection. It wasn't easy. Obviously, I wasn;t going down to Round Rock to get one. The team couldn't send one to me, because the demand was high and many other fans would want the same treatment.

I was determined though. Dteremination paid off. My source asked not to be revealed, but I am very grateful for the kindness.

Cat now joins other non-Chicago Bandits softball players Rachele Fico, Sarah Pauly, Sami Fagan and Kelley Montalvo on my shelf. That would be a great start to a softball team. If I add my Bandits bobbles of Jennie Finch, Amber Patton, Megan Blank, Megan Wiggins and Alisa Goler, it gets even better. 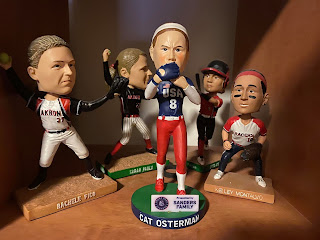