Celebrity Jersey Cards is a weekly series featuring celebrities wearing sports jerseys. Today, I celebrate the two worst teams in the NFL (although I would argue the Chicago Bears belong in this discussion).

A native of Dearborn, Michigan, Matt Giraud sang and played drums all through school. Giraud finished in fifth place on the eighth season of American Idol. Giraud sang the national anthem for the Detroit Lions, earning his Celebrity Jersey Card.He wore the #66, most notably the number offormer  guard Bob Kowalkowski. 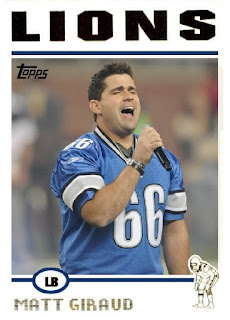 Velvet Sky has been featured here many times, thanks to her NFVel posters. She did one for every team and eventually I will get through all of them if I continue this that long. Velvet was a successful wrestler who is currently a color commentator for the NWA. For this Velvet Celebrity Jersey Card, she is wearing a #76 Luke Joeckel jersey. To see the other NFL posters and all of Velvet's other merch, go to RatedV.net. 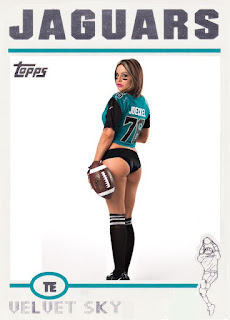